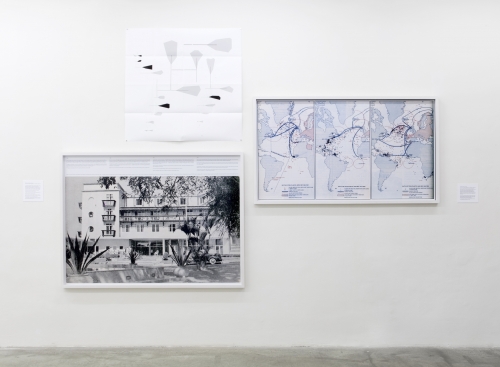 Some of the works in "Beyond the Supersquare" telegraph information cryptically—not in the transformative way of good art, infusing revelatory meaning into familiar scenarios, but as confirmatory code to the initiated. The title is one such lapse, a reference to a large-scale housing complex in Brasilia built in the 1950s and 1960s. Venezuelan artist Alessandro Balteo-Yazbeck, working with critic and art historian Media Farzin, has pinned up an array of fascinating documents linking U.S. foreign policy to modern art. (In brief, Alexander Calder designed a mobile for a hotel funded by Nelson Rockefeller, who was president of the Museum of Modern Art, president of Standard Oil and director of its Venezuelan subsidiary, Creole Petroleum, as well as a Roosevelt appointee to a commission on Latin America.) If only there were more to the project than guilt by association.