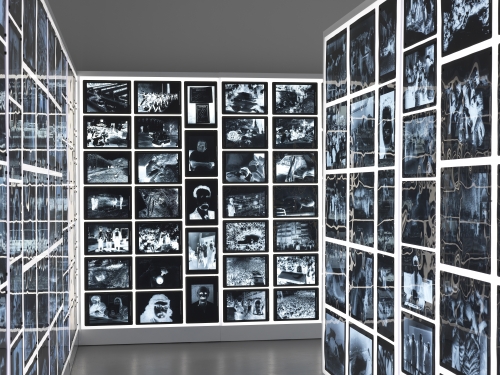 “What is a monument?” Asked the Izmir-born artist Hale Tenger to Buchakjian, over lunch in Karaköy, or, how do you immortalize the past? Especially a past of violence? Where is the alchemy of empty spaces, where specters materialize on their own? The grand stone structures of the past centuries, that are now vandalized and politically invisible, serve more as warnings than examples.

Only a few months earlier, Tenger had finished a large scale installation for a group exhibition at ARTER. I Know People Like This III (2013) was a labyrinthine archive of photographs, printed on medical imaging film and displayed as grids on luminous walls. The images acted as a showcase of political violence in Turkey’s public space that spanned from the period of the military coup of the 1980s all the way through to the protests in Diyarbakir (an emblematic Kurdish stronghold), which took place only a few weeks before completing the installation. Although the images were shocking by nature, the most arresting aspect of the installation was the display. There was something surgically neutral and indiferent about it, a sort of anti-memory: Everything that can be exhibited can, all the same, be easily archived and forgotten. Strategically placed at the entrance—and exit—of ARTER, the enormous 45 -meter-long installation is practically unavoidable, clearly visible from the pedestrian sidewalk of Istiklal Avenue, the main commercial avenue of central Istanbul. The installation is a mirror of Istanbul’s turbulent memory: A collection of public silences. You might as well think it’s a historiography, and not necessarily a trace of the present.