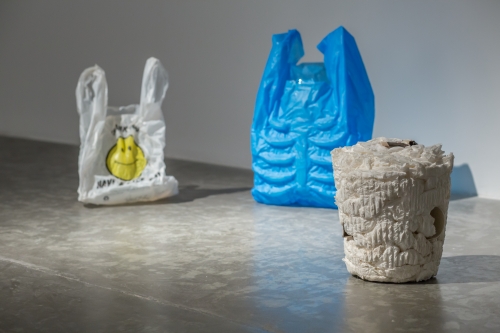 I am drawn to the solo presentation by Shadi Habib Allah (Green Art Gallery, Dubai, G27). I first saw his work in the Frozen Lakes show at Artists Space in New York, and he also participated in the last New Museum Triennial with a video piece that documented smuggling in the Sinai Desert. His work often explores shadow economies, and the sometimes-unseen travel routes of goods. Having been born a Palestinian in Jerusalem, Habib Allah brings a sense of the entrenched relationship between history, mythology and politics in the region where he grew up, but puts that in dialogue with contemporary developments in technology, for example, or the urgency of daily life in New York City. His last show at Rodeo, London, featured a video of a lump of cooking fat sliding through the nocturnal streets of Jerusalem, like a kind of ghost, while an elderly woman paced around inside a claustrophobic apartment; presented alongside was a distorted, chandelier- like sculpture. It was extremely evocative, and I expect this new installation – featuring interrupted audio of conversations between Bedouins – will be too.