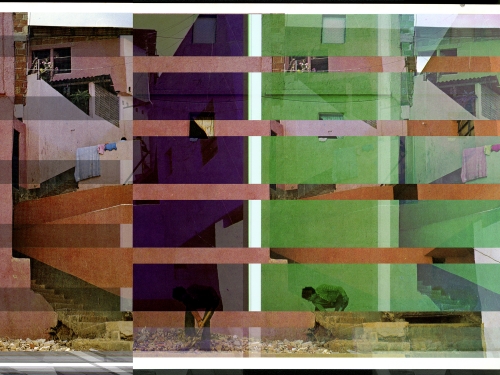 with Dibond backing and aluminum stretcher

Alessandro Balteo Yazbeck (Venezuela, 1972) lives in a self- imposed exile in his home/studio in New Jersey, building bridges across history and across his own reality. “I grew up in a family of immigrants (my father was Italian and my mother Lebanese), and I had my artistic training in an oil- producing country with strong economic and cultural dependences and imbalances.” The problems of industrial and post-industrial modernism emerge as entanglements in his proposals, in which he interweaves historical facts in such a way that the viewer may achieve an “interdisciplinary understanding of such phenomena as globalization and technological imbalance” and their effects on society and on culture.

Rather than being a chronicler or a historian, the artist and curator composes “gestures of survival based on the modest creativeness of recycling,” through conceptual strategies that combine traditional mediums and other disciplines: sociology, philosophy, literature, semiotics, geography, archaeology, anthropology, politics, history, and economics, to articulate a criticism of his own modernity. “Alessandro Balteo Yazbeck is one of the most important artists of his generation in Venezuela,” curator and art historian Cecilia Fajardo-Hill, who has curated several group exhibitions – many of them for CIFO – in which the artist has participated, remarks. “Fundamentally, he is a conceptual artist, but he is endowed with significant aesthetic and objectual awareness and intelligence. The relevance of his work is based on his investigations, as unexpected as they are provocative, on the paradoxical nature of modernity, particularly modernity in Venezuela.”