The artists brought together in this exhibition share an active interest in history, be that a collective or personal one. In several cases the artists share the experience of growing up under a restrictive regime and witnessing its disintegration, as was the case for those living through the collapse of Communist rule in Eastern Europe. In others, there is simply a fascination with historical processes and the systemic interpretations of “historical events”.

It can be argued that there is a system of historical information in place that is streamed to us regularly, but that system also selects ‘what’ information is transcribed to its audiences and ‘who’ it selects to speak for it. Is history as Avi Shlaim argues, simply “the propaganda of the victors”? The artists featured here, through their different oeuvres, essentially begin their work by questioning the processes from which history itself has been and is being created, interpreted and re-iterated. Antonio Gramsci in his “Prison Notebooks” made an astute observation on historical processes which was later re-visited by Edward Said in his seminal work “Orientalism”:

“The starting point of critical elaboration is the consciousness of what one really is, and is ‘knowing thyself’ as a product of the historical processes to date, which have deposited in you an infinity of traces, without leaving an inventory”

For these selected artists the process of tracing the “inventory” begins to form through archives which are created through the organisation and accretion of information. But there is also an archaeological aspect to art making which recognises that any new creation is, in essence, simply an additional layer upon the remains of a deep and porous past.

In some of the work state and religious figures of authority, under various empires and regimes, often find themselves as the protagonists who are brought in to question the human tendency to put faith in a system that has proven itself to be fallible. In others, alternative readings of “factual events” in which personal memory and reality merge and blur simultaneously, force the viewer to re-consider that which they may hold as being incontestable. At a time when boundaries are being re-drawn, territories re-assessed and political and historical contexts are re-examined, the exhibition highlights the urgency for recognising instilled personal preconceptions and collective presuppositions.

Kamrooz Aram investigates belief systems and deep held notions relating to the formation of identity that encompass nationalist, religious, and artistic ideologies. Intriguingly, Aram draws inspiration from both iconography and abstraction, thus challenging the viewer to refute reductive or binary readings of contemporary culture, politics and society. In this exhibition Aram will be showing a number of collages from his series “7000 years of history”. The collages address Iranian nostalgia, particularly for Persia’s magnificent heritage, but also for its reverence for geometry in art. He uses this platform to spring board onto Western art’s fixation with Modernism and its dominant relationship with the ‘exotic’ east.

Ali Banisadr creates apocalyptic imagery in which history and personal memory merge in visual spectacle. He blends the techniques associated with Western old master painters, most notably those of the Northern European Renaissance, with the thousand-year history of the Persian miniature tradition. Given the media’s constant rumblings of war and revolution, Ali Banisadr’s paintings provide a bitting commentary on the troubled dark side of the human condition in the twenty first century.

Marius Bercea’s paintings allude to a post-communist, early-capitalist Romania. The artist’s works are highly distinctive, as memory and reality merge to give rise to a rich sensuality. Bercea is inspired by a number of sources including what he calls an ‘intensely personal archive.’ His scenes are often surreal and highly psychological featuring gargantuan modernist buildings erupting from verdant landscapes. Described as one of the strongest colourists of his generation, his landscapes crackle with energy as deep blue and coral pink skies sing against lush green hills and the flecked greys of concrete structures.

Zsolt Bodoni’s dramatic paintings examine tools of power under various empires and regimes. In his work he re-creates darkly beautiful iconography of monuments and weapons of war while recycling the popular notion of the ‘hero’. The power struggles and iconic symbols of the left and right result in the recycling of status symbols and trappings such as cars, as well as statues. Recently the artist’s work has begun to lean more towards the symbolic, with actions evocative of myths and legends which are incorporated into the cavernous spaces the artist is becoming regarded for.

Ivan Grubanov critically reappraises subjects from the public and historical realm. A former activist, he intersperses ‘micro narratives’ with excerpts from ‘official history’, thereby creating an alternative reading of events and claims for truth, justice, and reconciliation. Grubanov’s practice is underpinned by an acute and persistent awareness of personal responsibility for a common identity. He addresses the practice of creating memorials through attempting to reach a visual conclusion and regards his painting as an intervention into the historical.

Ciprian Muresan moves lucidly between media, working in video, installation, photography, sculpture and drawing. A master draughtsman, he is particularly adept at using his meticulous drawings to seduce the viewer into looking in wonder at what often unfolds into disturbing scenes. Using humour as a device to draw in the viewer and upturn received notions of ‘normal’ social behaviour, long held religious rituals, or collective group activites, Muresan provokes us to question the ease with which we accept even shocking occurrences and behaviour as simply part of everyday life.

Film has been a key source of inspiration for Daniel Pitin. It is both a point of departure and a source of inspiration for his impactful paintings that evoke stage sets and - with their often dream-like quality - worlds that are somewhere between fiction and reality. Unsurprisingly Pitin has recently become interested in Foucault's notion of heterotopia, but in his practice theory is always mediated by the visual; with film footage from the Communist era combined with classic film noir, or 70s TV. The viewer might have a vague sense of recognition or deja-vu when looking at Pitin's work but for the artist, it's more about recreating atmospheres than replicating reality.

Mircea Suciu is fascinated by what he describes as ‘the absurd actions of man’. He watches people intently, observing the common man caught in his given ‘role’: helpless, despairing, hedonistic or wilfully ignorant. However he chooses to address this existential anxiety, Suciu does not satirise his subjects. Rather, he balances his investigation into man’s foibles with a simultaneous uncovering of his own exploitation. State and religious figures of authority often find themselves the protagonists of Suciu’s masterful and dramatic charcoal drawings. Sometimes depicted as corrupters or abusers, and often derided as figures of fun, Suciu reveals the danger of putting faith in humans and a system that might be exemplary, but are ultimately fallible.

Serban Savu has earned the title ' the Romanian Hopper' for his sensitively rendered paintings that capture the essence of moments in the lives of ordinary Romanians still suffering the legacy of Communism's social experiment: the creation of 'The New Man'. In the 60's countless people were forced to relocate from the countryside to concrete tower blocks on the peripheries of cities. Since Romania was predominantly agricultural, and this was all most people knew, the experiment largely failed. Few people truly adapted and so subsequently established bizarre and often pointless practices. As Savu's work shows, this cycle has perpetuated and his subjects often seem detached from their surroundings; going through the motions of life but yearning for nature and the rhythm of a long past era.

Hale Tenger is an internationally established multimedia artist whose works cut across conventional boundaries. Her large scale environments, video installations, as well as objects and video works, explore the dichotomy between nature and culture, and consider power relations through the role of observation. This exhibition will feature Tenger’s work “Give Me Back My Innocence”, a glass cabinet containing a crystal shoe placed on a velvet cushion draws on the story of Cinderalla- a tale that exists in one form or another in most cultures. The title of the piece is taken from a quotation of the Laurie Anderson song “The Day the Devil”. Like the song itself, the piece is tuned into the issues of consumer society, critiquing both capitalism and religion. A sustainable life on earth seems to be slipping away due to our irresistible attraction to materialism and individualism. Neither old nor new doctrines seem to have enough power to evoke the interest of the masses or bring hope of reversing the global situation. Paradise appears to be lost in all senses. Unlike the popular ending of all fairytales, there is no ‘happy ever after’ here; There is no one to give us back our innocence.

Alexander Tinei’s striking works reveal his preoccupation with issues concerning identity and belonging but simultaneously also examine the new phenomenon of instant global visibility via the internet. Tinei uses his traditional academic art training and painterly style to stage and submerge 'icons' of cyberspace within the traditional context of portraiture, which is often set against dark ‘Baroque’ backgrounds. The protagonist of the works is subject to the artists own interpretation of events which are re-staged and altered through the addition of things like strange blue lines and patterns on certain parts of the body. In his recent works, his subjects’ skins have turned eerily white, reinforcing their ‘otherworldliness’ and alien status. 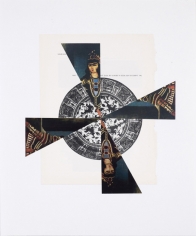 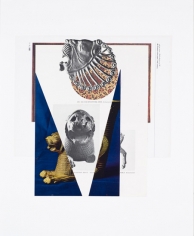 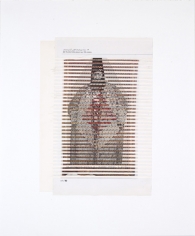 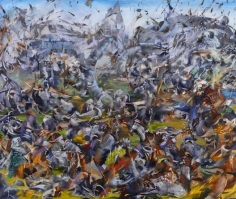 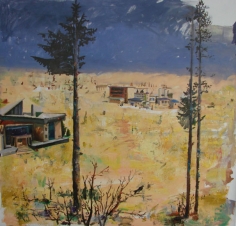 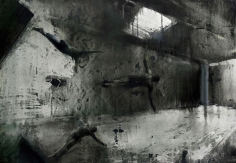 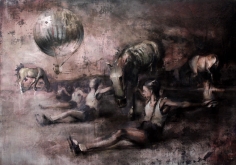 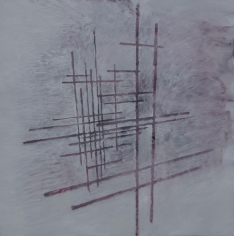 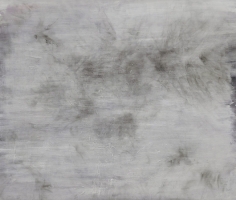 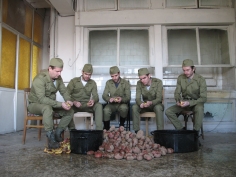 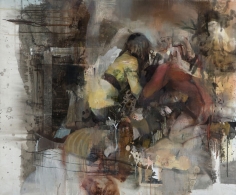 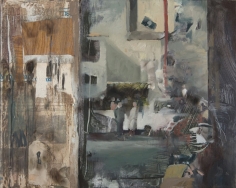 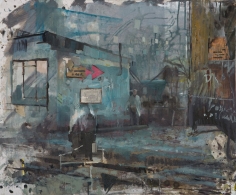 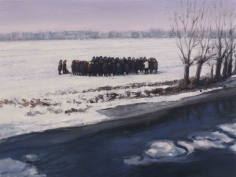 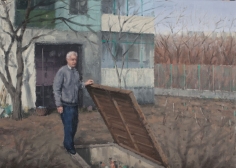 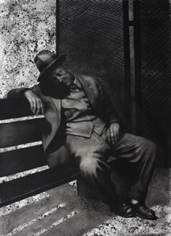 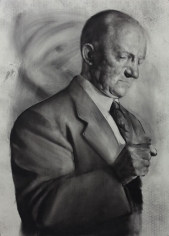 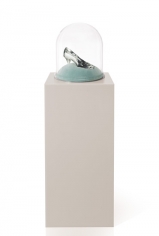 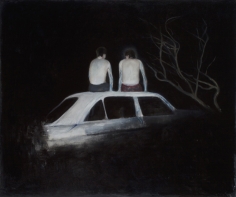 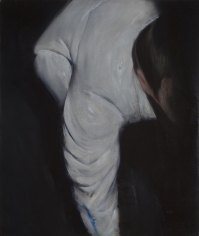 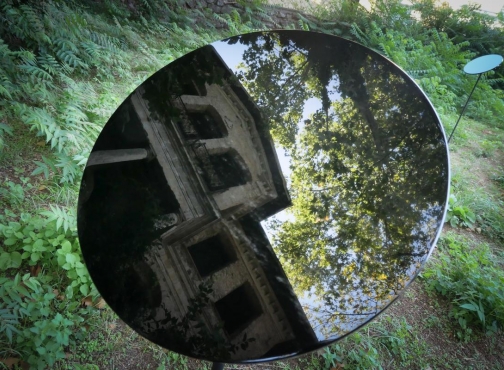 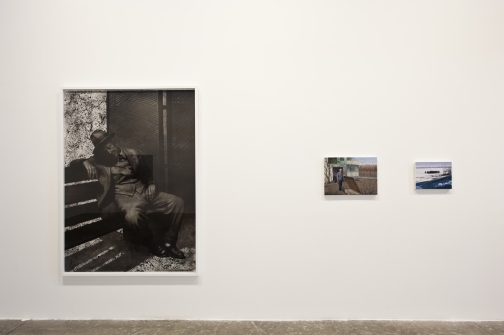 Several artists examine the biased perspectives from which history is often written. 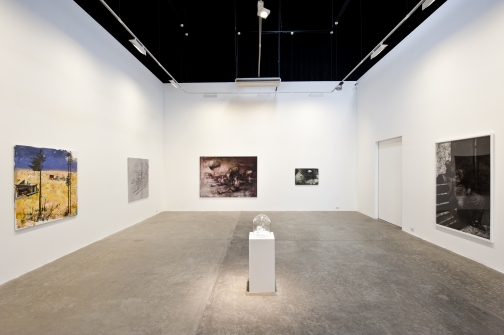 The National
Art arrests the eye in the UAE, Christopher Lord 14 May 2012

Christopher Lord rounds up the week's pick of art shows that you should take a look at. 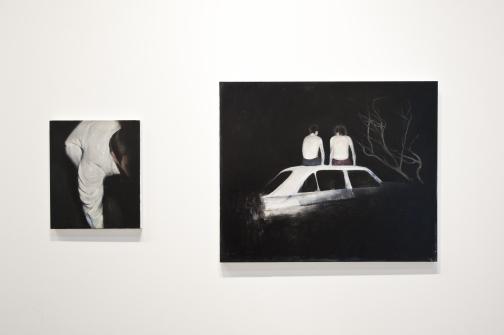