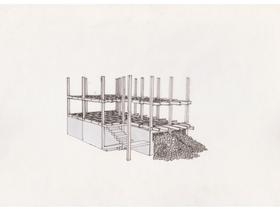 For its first participation at the Armory, Green Art Gallery is presenting Iranian artists Kamrooz Aram (b. 1978, lives and works in New York) and Nazgol Ansarinia (b. 1979, lives and works in Tehran) whose works both deal with a state of transition and in-betweenness through the various mediums they employ.

In his Palimpsest paintings, Aram appropriates a floral motif from a Persian carpet, repeats it in an organised pattern across the surface, and then systematically erases, dissolves and paints over in a series of expressionistic strokes, leaving behind evidence of layers of marks, covering up and erasure, often resembling city walls in which graffiti has been painted over. As with the ancient Greek writing tablets from which they take their title, these paintings reveal their own history through visible layers that leave the viewer uncertain about the chronology of marks. Aram’s paintings confront us with painting’s own contemporary status as a palimpsest.

This idea of a cyclical construction and destruction is also exemplified in Ansarinia’s new body of work in which she looks at Tehran as an architectural palimpsest where the urban fabric is continuously destroyed and erased, as a result of political decisions and an inclination towards privatisation and minimisation of public space. Here, Ansarinia is interested in capturing that moment in the cycle of progress, when it is unclear whether the city is under construction or destruction. These works bring attention to the act of demolition in an effort to analyse the economic and social conditions that have led to this process of urban development.

In both artists' works, whether through painting as a surface or urban transformations in a city, the chain of repetitions presents certain elements that are being introduced as quickly as they are covered over or erased, resulting in works that evoke a sense of flux and ambiguity.