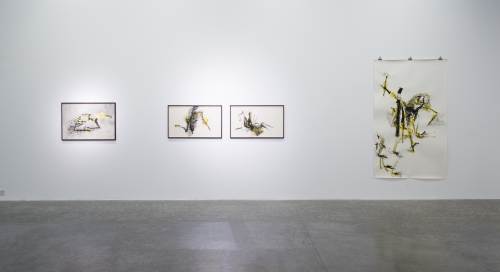 Having come into the world during the Lebanese civil conflict of the ’70s and the influence in Syria that consequently followed, it’s no surprise that Shawki Youssef’s works depict the visual stages of trauma. ‘My work is based on the proposition that trauma is here, visible or not,’ says the 39-year-old artist. He describes the subsequent influences on his work as both ‘physical and mental’, and uses words such as ‘hollow flesh and fluid being’ to illustrate the idea behind his latest exhibition, Acid Fields, an expression of the way bodies are represented in contemporary art. ‘The concept of the show is the trace that the body leaves, an emotional statement depicting the fragility and sometimes beauty of being,’ Youssef explains.

Here, he talks us through the details in, and ideas behind, three of his paintings. ‘The entire show begins with a wide view of a canvas which is a complete map. The other works depict closer shots, and eventually it goes into slaughtered details found on a city sidewalk, for example. Despite this visceral imagery, the presence of the sea in his works also suggest possibility, ‘the opposite of decay’.