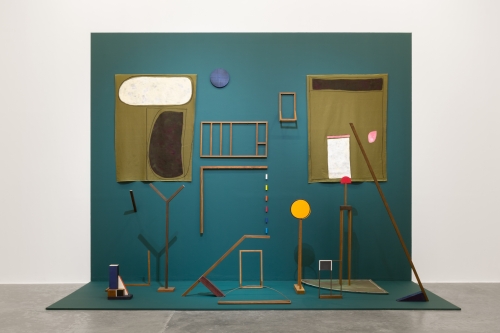 tempera on linen, acrylic on linen

Is it a painting masquerading as a sculpture or the other way around? Is it an elaborate stage setting for players unknown to their audience? Is it none or all of the above? Like any successful piece of contemporary art, The Garden by Ana Mazzei, a large installation in Green Art Gallery’s exhibition Theatre of The Absurd, is not supposed to be prescriptive in terms of interpretation. Instead, Mazzei is interested in playing with expectations and in this case, forcing the viewer to reflect upon their own physical presence in relation to the work.

Upon the painted backdrop of a sumptuous dark teal, 18 objects (all part of the same work) have been placed. They include oddly shaped angled wooden plinths rising up to nowhere, pieces of felt and iron, and paintings on linen. Pops of colour appear seemingly at random: a yellow disc, a blue disc, a red semi-circle and rainbow painted wooden tracks. The entire structure is more than three metres tall and four metres wide and invites perusal from different viewpoints engaging the audience in an almost theatrical way – hence the exhibition’s title, which takes its cue from this work.

The dynamic between audience and environment is central to Mazzei’s practice and as spatial configuration informs her work, it has an interest in architectural functions. This is the central pillar upon which the entire exhibition pivots. Theatre of The Absurd is the result of several months of rumination from the gallery’s owner Yasmin Atassi about how artists use architecture as a launching point for wider subjects as well as the way they use architectural language to decipher space, objects and mass.

What is particularly enchanting here is that none of the artists in this show are on the Dubai gallery's roster. Mazzei is from Sao Paolo – and made a similarly striking commission for the recent 32nd biennial in the city last year with Espetáculo [Spectacle] (2016). The other four artists are spread across the globe, with none having appeared in exhibition together before. This is the treat of a group show. Done well, a group show brings in the new perspective of a curatorial standpoint and can start dialogues between artistic practices that hadn’t been seen before and as such, can highlight nuances previously hidden.