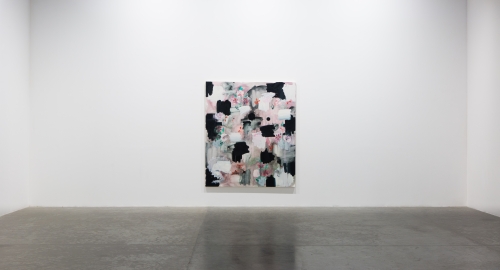 Every day, on the way to his studio in Brooklyn in New York City, Kamrooz Aram would notice large patches of paint on garage doors, buildings or other random surfaces made by the municipal authorities to cover up graffiti.

An artist and, more specifically, a painter, Aram became fascinated with these marks and began to incorporate them into his work.

“That’s how it all started; where the gesture of covering up began,” he says about a photo essay he compiled of these painted-on surfaces that features at the back of his new book, Unstable Paintings for Anxious Interiors.

The wonderfully titled monograph was launched last month during Art Dubai, which simultaneously saw the opening of his second solo show at Green Art Gallery in Alserkal Avenue.

The paintings displayed in this show contain marks similar to the ones he first saw on the sides of buildings in New York. This is the first clue to his technique, which is as much about destroying a piece of art as it is about creating one.

Every piece in the exhibition begins in the same way. Aram takes the floral motif from an old Persian carpet that he saw in a New York shop and repeats it methodically across the canvas. Then he sets about removing the paint with a rag and turpentine as well as occasionally adding block shapes to create the final product – semi-abstract, collage works, which the gallery calls “a tool for a certain renegotiation of history”.

Choosing to call the exhibit Palimpsest furthers his idea – a palimpsest being a page of a manuscript from which the ink has been washed off so that it can be reused.

“In all of my paintings, the process of both making and destroying becomes important because the image is the result of a performative process,” he explains.

“There is actually a lot of time not painting because, although I have been exploring this idea since graduate school, as I have matured I have really come to understand that restraint is as important as a decision as mark-making.”

And so Aram wanders slowly through his own show, pondering each painting with almost as much intensity as someone who is looking at them for the first time.

One can’t help but wonder, if the process is about destroying, then how does he know when he is finished?

“The idea of how you define a resolved painting is an interesting question,” he responds. “I think at times I push the boundaries of what is a resolved painting and what is not. Sometimes you can achieve it minimally and other times, if you push it too far it goes back to nothing so the process goes back and forth until you determine when the painting has achieved its peak.”

So as you ride the wave between peak and trough within each painting and as the canvases rhythmically echo one another in the gallery space, Aram’s world begins to slowly unfold.

He was born in Shiraz in 1978 and has lived in the United States since he was a child. He fuses his concurrent histories but not in a clichéd way. He takes the Persian carpets as decorative objects and puts them into the context of an art work, which he argues, was perhaps its original function.

“We often forget that carpets were intended to have meaning, and maybe they are part of the same history that started with people making images on the walls of a cave,” he says.

By choosing this as a point of discussion Aram says he is questioning the distinction between ornamentation and decoration; then, by tying in the links to the graffiti of New York’s suburbs, Aram is opening up the second string of conversation, which looks at his western heritage and the blurred line in between.

There is no direct or didactic reading for Aram’s work, just a pensive stroll through a Resistant Space or Nostalgic Garden (to quote some of the titles of his works) and one you’re encouraged to take.