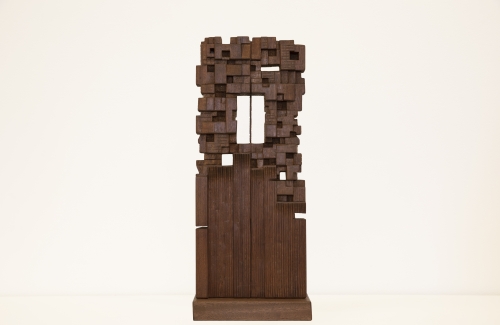 Green Art Gallery in Dubai has always had a historical bent – part of its broader interest in the Gulf over the past 10 years in researching and exhibiting Arab modernism. The gallery has recently shown the work of early and mid 20th-century Egyptian painters such as Samir Rafi, Inji Efflatoun and Effat Naghi, and currently it is turning its gaze to the finely carved, abstract sculptures made by Lebanese artist Chaouki Choukini. Shaped out of wood, marble and bronze, the works bear a proud verticality, rooted in the landscape but somehow musical and rhythmic. Choukini speaks of the “cord”, or a single line that passes through his sculptures, holding shapes together and forming new growths. This exhibition provides the chance to see the progression of these ideas over 40 years of work, bringing together sculptures from 1979 to the present.

Choukini was born in Choukine, Lebanon, in 1946 and, like many Arab artists of the era, moved to Paris. “I had just begun at university and was taking classes to prepare to study medicine in Egypt,” he recalls. “At the same time – almost like a hobby – I was making sculptures in clay and ­terracotta.” On the basis of those, he won a scholarship from the Lebanese government to study in Europe.

“I came from a modest family and the studies were free,” he says, explaining that his parents did not object. And off he went to Paris. It was 1967 – the year before radical unrest in the city – but Choukini was installed in an older school, Ecole des Beaux-Arts, where academics still reigned. It was there that he found the materials he would work with his whole life – wood, clay and stone.