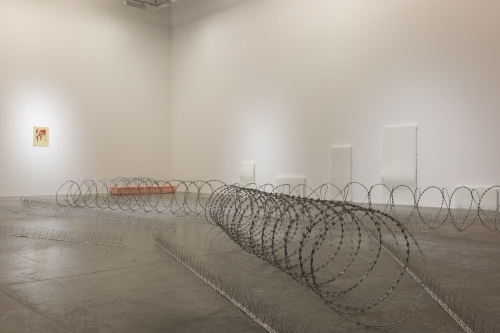 I feel obliged at this early stage to offer a word of warning: Remnants is a particularly challenging exhibition, which refuses to give up its secrets easily. It is thematically knotty, occasionally infuriating, and it demands patience and perseverance. It is also, at times, immensely rewarding.

Curated by Sara Alonso Gomez and held at Green Art Gallery in Dubai, Remnants features works by eight artists from Cuba and the Middle East. It grapples with themes of waste, displacement and exclusion, as well as the “remnants” left behind. As Gomez notes in the programme, “the things and phenomena that surrounded us before seem to threaten us today”. And Gomez is not just referring to material waste. “What and who would fall into this category of the residual in the world in which we live?” she asks.

This question is most emphatically addressed by Ghaith Mofeed, the self-taught Syrian artist who has created a work – the most accessible here – that challenges our understanding of world order. In Citizen of my World (2018), Mofeed has reconfigured a world map on a rough piece of fabric, placing Syria at the centre, and partially hiding, behind overlapping joins, those countries that Syrians are forbidden from entering. There is a discomfiting contrast between the ease with which Mofeed has done this and the seeming impossibility of affecting real change in his homeland, which he has been forced to flee.