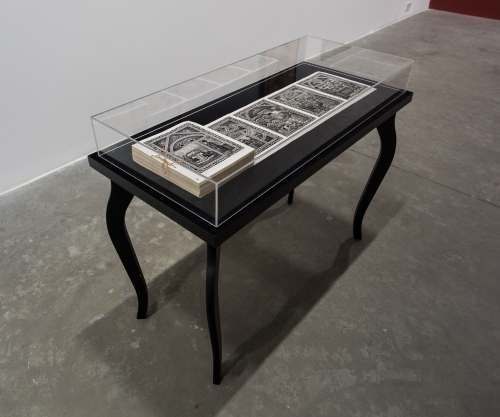 Dip into any publication on modern Arab masters and you will come across the name of Fateh Moudarres. The late Syrian painter, who studied in Rome in the 1950s, is considered the pioneer of modernism in the Arab world.

Yet, while distinctive squared-off figures populate most of his paintings, his sketches and works on paper reveal another side to him and his practice, and they are far less frequently exhibited.

That is one of the reasons that Works on Paper: Hikayat, an exhibition that brings together more than 50 works on paper by modern Arab artists at Green Art Gallery in Dubai, is so significant.

“People tend to underestimate the significance of drawing in an artist’s career,” says Yasmin Atassi, the manager of the gallery. “The first aspect of this show is to underline its importance.” The second, she continues, was to put the spotlight back on modernism.

Although it may sound the same, modern art is not synonymous with contemporary art. In fact, it spans the years from the 1860s to the 1970s, although in Arab terms, it is generally considered to be only the latter half of this period.

Very few galleries today focus on modern art, mostly because they are all new and modern Arab art is not so easy to access – another thing that makes this show special.

Moudarres is one of eight artists displayed in the carefully curated show at the gallery. Atassi has access to his works through her family: her late mother Mayla was an art dealer in Syria in the 1980s and moved to Dubai in the 1990s, where she founded Green Art in 1995. Atassi also remembers meeting the artist as a child.

For the name of the show, Atassi chose an all-pervading aspect of Arabian culture – storytelling.

“When I started putting the show together, I realised it is almost like the story of the region during that period, so I chose to call it Hikayat, which means stories or storytelling and is a deeply embedded part of our culture.”

So, from the highly political works of Aref El Rayess, whose drawings denounce the corruption he witnessed within political circles after the Cairo accord of 1969 and the 1973 Arab-Israeli war, to more social pieces such as those of Jamil Molaeb, which were inspired by the mountains of Lebanon and scenes from the traditional village life, the exhibition depicts a slice of history.

There are two pieces in the show that stand out. The first is an archive made by Khaldoun Sheishakly. Now in his 80s, this Syrian artist has spent his entire life drawing and documenting 500 Damascene professions in intricate detail with ink on paper. Shops and Vendors of the Past is displayed in a glass case in the gallery to protect it and is, as Atassi says, “ truly a museum piece”.

The other is the drawing in the entrance of the exhibition, an untitled piece by Adham Ismail. Drawn with a calligraphy pen in ink, the image of a nude woman holding grapes is wonderfully rendered and marries both the eastern and western traditions.

“We are an old gallery with access to the younger generation and the reaction to these works has been really encouraging,” says Atassi. “We hope to do one show a year like this from now on.”