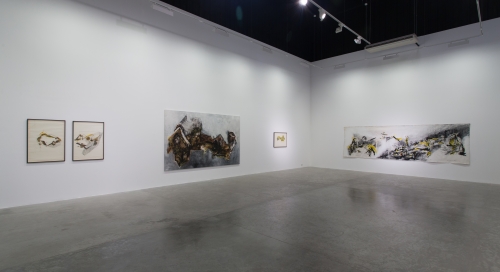 Although he has been painting for his whole life, it was only two years ago that the 40-year-old Shawki Youssef emerged from the shadows and declared himself a full-time artist. However, upon experiencing his work, it is questionable whether he did emerge, or if it is in the shadows that Youssef’s hauntingly delicate paintings belong.

“I will always be marginal,” says Youssef, with soft and careful tones. “But now I am willing to converse and to learn.”

Often compared with the British figurative painter Francis Bacon for his jagged, incomplete depiction of the human form, his exhibition Acid Fields is a collection of abstract works featuring tormented and distorted figures bearing weapons and made almost exclusively of black and yellow.

It is only his third show since his decision to take on the painter mantle in 2011 and it is a direct reaction to the vicious war that surrounds him.

Undoubtedly morbid and at the same time fragile, the show, at Green Art Gallery in Alserkal Avenue, sweeps the viewer through a series of increasingly explosive works on paper and canvas that all echo a self-penned poem printed on the wall about death.

But it is the two paintings that veer from illustrating bodies that hold the heart of the exhibition. Arab World Map Construct / Reconstruct and Arab World Map 2013 show the region in a frail state.

The first, the smaller of the two, is a map of the region, identical to the Baath party logo with its motto in Arabic that translates to something similar to unity, freedom and socialism. In the second, much larger canvas, the map is inverted and the colours swirl to a muddy darkness.

“I showed this painting to an 8-year-old girl and asked her what she saw,” he says. “She said ‘the beast’ and this was precisely the phrase I had in my head.”

Expanding further on this piece, Youssef talks of a film called The Underground where the former Yugoslavia floats away like an island. Although he doesn’t say it, it is impossible not to assume that he is questioning what will happen to his land or in fact to the whole region – will it, too, float away and if it does, will it be replaced with something darker?

With titles such as On the Falsity of Remorse and It is A Land Brimful With Eyelashes of Its Dead, it is difficult to leave Youssef’s show feeling optimistic, but its emotions are almost tangible. And as much as anything, it is an important social commentary.

“What is happening in the Arab world is a necessary thing,” Youssef declares. “We had 400 years of the Turkish empire where not so much as a book came out of the region. How can you go centuries without even a thought? Yes, what is happening is necessary, but history is harsh and people now are paying a high price.”