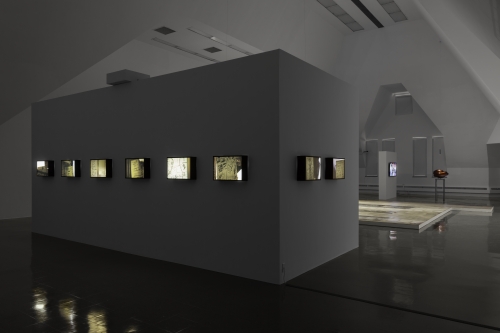 Installation view at The Renaissance Society

Shadi Habib Allah investigates the margins. The Palestinian artist who lives in New York has made a film about the Bedouin on the Sinai Peninsula. The catacombs in Jerusalem. The interrogation rooms off the main halls of Ben Gurion airport. Imagine a camera trained on an object; then it moves a few feet left or right of centre.

Habib Allah’s work is the subject of two solo shows at United States institutions the Renaissance Society, an independent space in Chicago; and the Hammer Museum in Los Angeles, in partnership with the Mophradat cultural exchange agency in Brussels. For these exhibitions he turns his focus to the American welfare system: or more specifically, the illicit economies that have emerged to navigate its failures. “I’m interested in the strategies that mimic the actual system to keep it moving,” he says. “The project isn’t looking at welfare directly, but the communities affected by poverty and the mechanisms they used to cope with it.”

The works investigate the so-called “food deserts” that emerged because of red-lining in Miami. These establishments – corner shops in poor communities, many Arab-run – offer one prime product: cash for welfare cards.