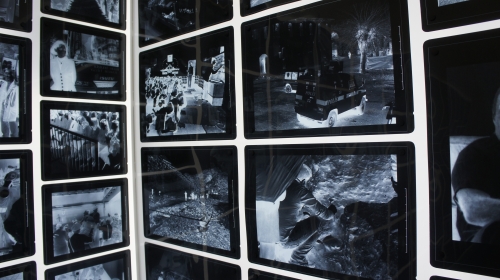 Hale Tenger’s installation “I Know People Like This III” presented first in the group exhibition of contemporary Turkish art “Envy, Enmity, Embarrassment” at ARTER Istanbul in January 2013, functions as one of such labyrinths. Cleverly and uncomfortably assembled at the entrance – and exit – of the exhibition space, the installation grows as a series of corridors encircled by walls constructed as light boxes that permit us see a visual journey – from a variety of sources: news agencies, archives, journalists, neglected images – through scenarios of violence in the public space in Turkey since the military coup in the 1980’s throughout the protests in Diyarbakir, shortly before the completion of the installation. Rather than being simply an archival collection, the images are printed on clinical X-ray machines and made visible through the luminosity of the walls holding them together in horizontal grids that also carry chronological sequences. Tenger’s procedure isn’t simply one of displaying memory as a vast and interminable field but also of interfering with the process.