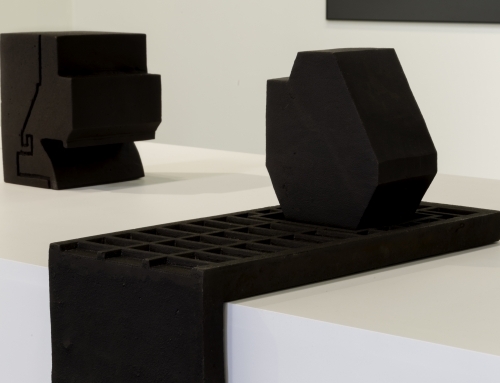 The Lightness of Mass, Seher Shah

The Lightness of Mass, Seher Shah’s first solo show which is currently running at Green Art Gallery Dubai until May 9, is phenomenal. Responding to the opening invitation, I visit the exhibition which features six series of works using drawings and sculptures. Seher masterly employs techniques and materials such as paper, itching, cast iron and ink to shape her architectural approach with the insertion of sketches and graphic plans.

The artist’s architectural background is flaunting inside the white cube; she effortlessly weaves it between the rational and the congenital. The sheer preoccupation with concrete heavy forms does not halt a sense of lightness. Time is a focus in the exhibition; by looking at the ethereal obscured abstract images of New Delhi Municipal Council and London’s Barbican Centre in Brutalist Traces, the series convey a sense of fading of what was present. Flatlands is another faded architectural master plan presentation and the largest exhibit in the space; it is composed of 15 ink on paper panel drawings.

Getting closer to the rigid iron objects exhibited in the center, the playfully modeled sculptures are abstract yet representational. One couldn't but admire the Untitled oxidised time-worn cast iron sculptures which resemble the waning of something existed in the past. On the opposite side of the gallery there is Machrie Moore series of images in collaboration with photographer Randhir Singh; the images showcase decaying stones which stand still, resisting nature’s erasure elements.

The exhibition encompasses mass yet it is light and pragmatic; it reflects the current faded state of what existed and simultaneously signifies decay of heaviness into a current state of lightness. While heaviness and lightness may oppose, they both assert existence.