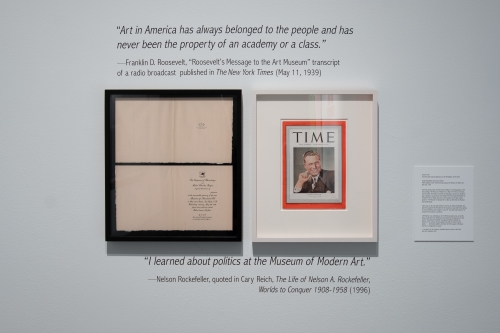 In collaboration with Media Farzin
Installation view at The MET Breuer, NY, 2018

Most of us harbor strong beliefs in conspiracy of one kind or another. It could be about something as big as the JFK assassination or the Twin Towers on 9/11, whether or not anyone ever landed on the moon, or if vaccinations aren’t a big hoax. Some believe Elvis is still alive—probably some of the same folks who believe the Earth is flat. Maybe it’s something in your own life, like your high school teachers colluding to give you lower grades than you deserved because you were too outspoken in your political views, or, jumping ahead several decades, your kids conspiring to take your driver’s license away and put you in a retirement home.

Many readers of this publication possibly see capitalism itself as a grand conspiracy: Everything works together—politics, the educational system, wages, the church, the courts, police and military, foreign policy, male supremacy, race hatred—to make the rich more powerful and the working class impotent.

The show veers in two directions. One is the factual and the other the lyrical and fantastic. An artwork illustrating the former appears soon after you enter the space. At first glance Alessandro Balteo-Yazbeck’s 2006 “UNstabile-Mobile (from the series Modern Entanglements, U.S. Interventions)” looks like a huge standing Alexander Calder mobile, and you wouldn’t know that it’s anything other than that except by reading the didactic panel on the wall. The shadows cast on the ground by the fixed floaters exactly replicate a 2001 Dick Cheney Energy Task Force map of the Iraqi oilfields that the American invaders in 2003 hoped to secure for U.S. companies (such as Cheney’s own Halliburton)—as in the classic imperialist koan, “How did our oil get under their sand?”