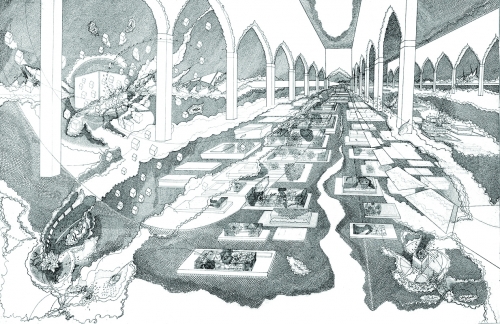 It is hardly surprising that Seher Shah's first mature body of work, a set of digital prints and graphite drawings on paper provocatively titles Jihad Pop (2007), garnered immediate attention and acclaim. Baroque conflagrations of signs, symbols, spaces and structures, they uncannily encapsulated the polarized geopolitical conditions of our post-9/11 world. Mistakenly understood as illustrations of these external realities, they were, however, intended as attempts to represent, metaphorically and conceptually , the artist's complex internal subjectivity. Her subsequent art practice has demonstrated a growing interest in abstraction, both conceptually and through subject matter referenced, possibly as a conscious strategy through which to subvert the reductive categorizations of discourses invested in identity politics and cultural authenticity. This essay will explore the emergence of this strategic abstraction through a careful analysis of a series of large-scale graphite on paper drawings that Shah has done through her decade-long career.