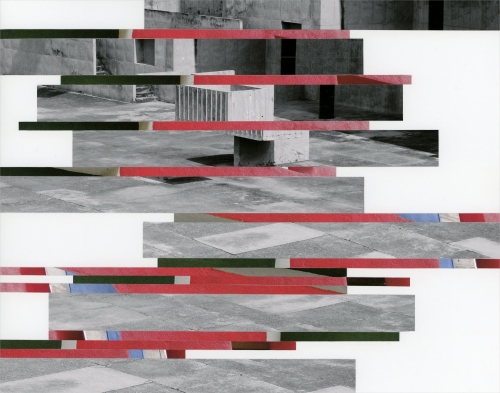 It has been often observed that the Partition of India and Pakistan in 1947 did not get fully commemorated in public imagination, say, through a museum, a ritual or some kind of dialogue that would acknowledge and memorialize the experiences of the people who were unsettled by this act that left nearly 3 million dead and 15 million displaced. “Lines of Control,” curated by Iftikhar Dadi and Hammad Nassar at Cornell University’s Herbert F. Johnson Museum of Art, was a recent exhibition that gathered over 40 works in varied media that dwell on the theme of borders, particularly the lines that got drawn as colonial empires physically receded in the last century. As suggested by its title, the India-Pakistan Partition was the provocateur for this show, but the exhibition cast a wider span, gathering artists from Africa, the Americas, Asia, and Europe.

New York-based Seher Shah’s large-scale, impressive collages foreground a key problematic in thinking about colonialism and the borders it continues to engender. Shah overlays images of Islamic, Baroque and colonial architectures, and historic photographs researched from sources such as the Royal Geographical Society, creating very nuanced — delicate, measured and rich images that expose us to multiple civilizational and cultural perspectives. Shah’s collages resonate with a critical distance particular to her position as a second-generation artist from the subcontinent.