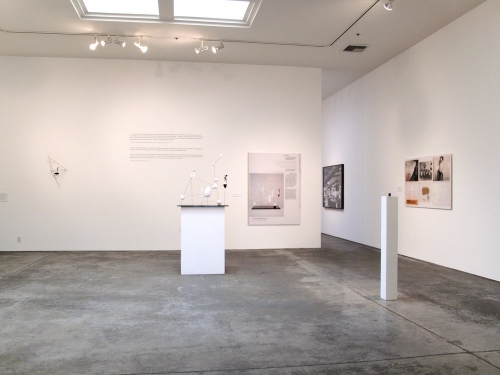 A collaboration between a conceptual artist (Balteo-Yazbeck) and an art historian (Farzin) doing research on the entanglement of modernist art with Cold War-era geopolitics and corporate maneuvers might sound like a promise of boredom — a seminar in picture frames hung on a wall. But this exhibition, which borrows its title, Cultural Diplomacy: An Art We Neglect, from a 1954 issue of the New York Times Magazine, manages to be utterly compelling. Some of that’s likely because of the presently heightened sense of America’s entanglements, meddling and attempts at repairing its relations with the rest of the world, and with the specifics of Obama’s recent handshake with Hugo Chavez and the cocktail of overtures and rebukes the White House has been serving up to Iran of late. And it’s also because the subject matter of modern art and artists (particularly Alexander Calder) being utilized/used in both U.S. State and corporate diplomatic plays in Venezuela and Iran (Balteo-Yazbeck’s and Farzin’s respective countries of birth) varies between the troubling, the bizarre and the absurd, but is consistently fascinating.

While exhibitions heavy on text and documentation can be turn-offs, this one is the art equivalent of a page-turner. And while one might wonder if Balteo-Yazbeck’s role in all this isn’t a little too easy, slipping into resonance with current events and leaning on source material that’s already juicy, what sets this exhibition off ultimately is Balteo-Yazbeck’s mastery of contextual play and his eye for poignancy and irony hidden in plain sight, as evident in his models of Calder works that incorporated the forms and lines of both oil derricks and bombs, or his photo of Calder’s 1946 Orange Fish mobile hanging in the Tehran Museum of Contemporary Art, watched over by gilt-framed portraits of Iran’s post-revolution leaders. If this were a seminar, I’d enroll, and as an art show, it was one I didn’t want to leave.