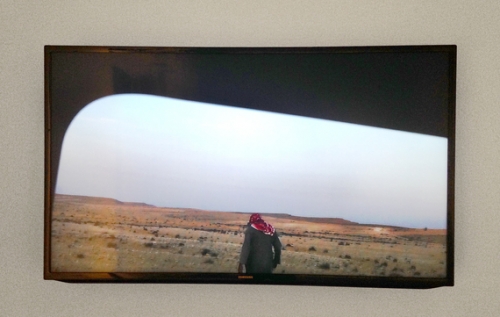 Surround Audience, as is titled the 2015 New Museum Triennial, closes later this week after a three-month run full of reviews, performances, lectures, screenings, and a quirky ad campaign. It addresses a digital world that has new, blurred lines between audience member and showrunner.

Found on the following floor is another personalized account of a symbolic journey. Shadi Habib Allah's untitled video work is an 18-minute montage of first-person footage. The video serves as the artist's account of several trips crossing the Sinai Peninsula in Egypt. The peninsula is a symbol of contention for Egypt, as the region's native people, the Bedouin people, are considered to be neglected by the Egyptian government. The process of the trips is a political one, as the peninsula is used as routes for illegal smuggling, despite military surveillance of the region. The turbulent nature of the camerawork and editing indicate a perilous, very real, lived experience. It is one of the most compelling works in the show, as the danger is palpable, and the thrill of watching real footage is more acute here than anywhere else in the exhibition. It's dull placement on a wall in a crowded, well-lit room, without headphones, make it clear that this acuity was lost on the curators.

In any case, this video may appear at first like the most likely candidate here for a traditional runand-gun style documentary, yet, much like Donna Kukama's work, the video does not afford the viewer with any transparent commentary or supplemental materials like interviews, title cards, or introductions. It is a diaristic, nonlinear account of real experiences, existing on its own as a final product. This lack of bookended-ness defies the laws of traditional documentary form, and permits us to experience his journey in a far more unmediated way.