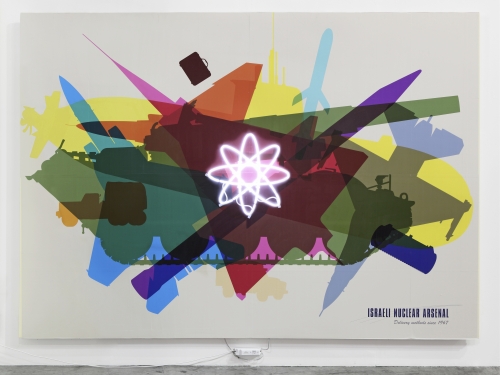 A curious text awaited anyone who leafed through the catalogue of Jens Hoffmann’s 2012 “remake” of Harald Szeemann’s legendary 1969 show commonly known as When Attitudes Become Form. Buried at the start of the catalogue/book—a faithful replica of Szeemann’s alphabetically tab-paged original design—tucked obediently into the checklist of featured works, figured the title “Israeli nuclear arsenal, circa 1967,” attributed to Venezuelan artist Alessandro Balteo-Yazbeck (b. 1972). In classic artwork-labelling tradition, the five-line entry dutifully detailed the work’s material (“mixed media”), size (“dimensions variable”) and provenance (“IDF,” the Israel Defence Forces), before revealing that the piece appeared in the Hoffmann-curated show courtesy of Mordechai Vanunu, the inaccessible Israeli nuclear technician–cumwhistleblower who, in 1986, leaked information about the Jewish state’s nuclear weapons program to the British press.

Of course, there was no work. Or rather, the catalogue entry was the work—to be reproduced and disseminated, via print and electronic media, in databases, exhibition checklists, institutional inventories and, well…art magazines. “If Harald Szeemann had known that someone came up with a nuclear arsenal and wasn’t saying anything about it,” Balteo-Yazbeck explains giddily, “he would have seen it as the best conceptual artwork of the 1960s.” Balteo-Yazbeck’s gesture of codifying the entire history of the phantom arsenal into a single label was not only the ultimate refusal of object-making, in almost utopic Conceptual style, it also crystallized many of the impulses coursing through his entire practice—the blurring of politics and art, a daring curatorial bent, a crafty “stand-back-andlet-facts-speak-for–themselves” posture, and a strategic taste for appropriation. As the devilishly intelligent Berlin-based artist gears up for a Dubai show at Green Art Gallery, the Israeli Nuclear Arsenal catalogue entry offers cause to reflect on a profoundly silent “piece” that distils a thoroughly distinctive voice.