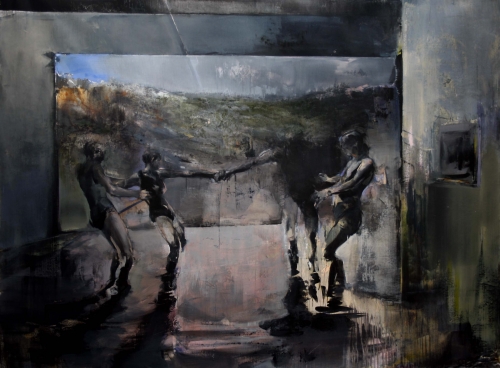 Directed by human dynamo Yasmin Atassi, this Dubai space is one of the emirate’s oldest art spaces yet retains a youthful, questing approach that staves off complacency and predictability. Atassi’s booth this year is an excellent overview of the gallery’s roster, incorporating photography, video and paint.

What will you be bringing to Art Dubai this time around?

YASMIN ATASSI: At Art Dubai this year, we’ll be focusing on five artists from our programme. There are two new works by Iranian, New York-based painter Kamrooz Aram, which continue to explore the complicated relationship between traditional Eastern art forms and Western Modernism, specifically relating to the notion of the decorative. Both of the paintings are very important works, new and never previously exhibited. We’ll also be showing a new work by Turkish photographer Nazif Topcuoglu, an artist with whom we’ve been working with for about three years now and whom we showed at Art Dubai in 2010.

We’ll also be showing a sculpture by Hale Tenger, titled ‘We Are So Lightly Here’. This is the first time we’re showing a work by Hale at Art Dubai and we’re excited to anticipate the response to the work. Hale is a very established artist and one of the most important contemporary artists on the Turkish art scene, a very institutional artist, but we feel it’s important to show her at the fair, both for private collectors and also to the museum groups who are coming to town.

Also, we will be showing two artists whom we have signed recently in 2012 at the Gallery and who are reflective of how our programme is expanding to introduce international artists. Venezuelan artist Alessandro Balteo Yazbeck’s work is part of his ‘Chronoscope Series’ which he produced with Media Farzin (it was shown at last year’s Istanbul Biennale, among other venues). It includes a video which we showed at The Moving Image Contemporary Video Art Fair in London last October and which won the Moving Image Award and was subsequently acquired by the Tate for their permanent collection.

For Dubai we will be showing the ‘Chronososcope, 1951, 11pm [Stelae]’, (2009-2011) which is an installation of diasec stills from the video. ‘Chronoscope, 1951, 11pm’ is a 24-minute video that uses original footage from ‘Longines Chronoscope’, an American television programme that aired between 1951 and 1955 in the US, and invited “experts in the field” to offer opinions on current affairs. The subject of the video is the nationalization of oil in Iran and its reverberations in the Western world. While the video appears to be a straightforward TV programme, its source material has been heavily edited to emphasize the eerie resonances between the 1950‘s and the present.

So we feel that this work will be very interesting for the audience, as it something very relevant to the region as well.

The second new artist we will be showing is Hungarian painter Zsolt Bodoni, whose first solo show with us was in January 2013. Zsolt is another brilliant painter who we signed up this year. Bodoni’s practice is characterized by large complex canvases, usually depicting industrialist and viscerally atmospheric backgrounds in which his characters innocently exist. A recurring motif in his work is bringing to the forefront established systems of power, which are often symbolised through figures of animals depicted as machines and tools of war, used by humans in their unbending quest for power. He is very well known as one of the most interesting emerging painters abroad and i am really excited to be introducing his work to the region.

What keeps you coming back to Art DubaI?

Art Dubai is our home fair and we will always support it. None of us can do without it and vice versa. While it’s a ‘local’ fair, it’s also become very global. I think the strength of Art Dubai is not only in its commercial success, but also all the non-commercial aspects of it. It really is a no-brainer for someone who really wants to understand what is happening in the contemporary art scene from the Middle East, Turkey and South Asia. There is no other fair like it, in terms of quality and programmes.

Last year how did you rate your experience?

Last year was fantastic for us both in terms of sales and interest. Many or most of the buyers were new and based in Dubai and had just started collecting. That was very exciting. I would say the most interest last year was in Kamrooz Aram, Seher Shah and Jaber Al Azmeh.

How do you survive three days in a booth?

Well, during that week you just get a natural high for some reason! I live in my car basically, as the team and I juggle between collectors, the fair and the gallery!