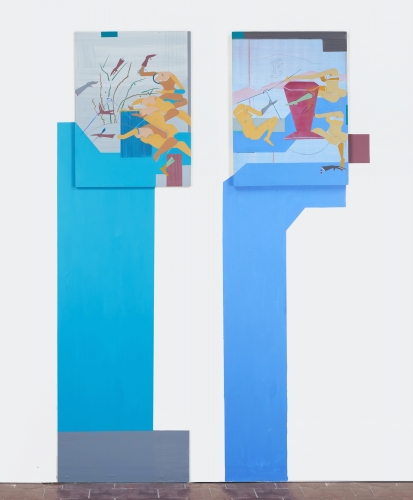 Cerulean, dulled aqua, ochre and lavender grays jump out at the viewer when gazing upon the misleadingly flat figurative paintingdrawings of New York-based Iranian artist Maryam Hoseini. An equally deceptive digital 80s graphicness belies the sensitivity of pencil markings within the acrylic, ink and pencil works on wood panel. “I continually revisit the surface of my paintings with pencil drawings to refuse the logic of drawing as primary or secondary,” says Hoseini. “I am interested in pushing the boundaries between finished and unfinished.” It is those very pencil marks lend the works a distinctly ‘unfinished’ quality, and much of Hoseini’s practice revolves around the concept of incompleteness, musing, “What is finished or unfinished in painting or drawing?”

Hoseini’s oeuvre simultaneously derives from and functions as a point of departure from which closed conversations are opened and remain in continued flux. “I think a lot about incompleteness as a state of being,” she says. “On a formal level in painting or drawing there is always that question, but conceptually, this incompleteness of the human condition makes me think of ruins.” Touching on topics from socio-politics and Google image searches to her use of colour, it seems Hoseini mentally meanders around topics that never really result in an “end” to the conversation, rather, leaving traces behind which she archives for later use. “Being from the Middle East, when you speak of ruins it automatically is connected to archaeology or architecture, and while that is a part of it, it’s also how history changes people and creates ruins within their lives and spirits.” By learning from the past to address the future, Hoseini endeavours to create a new space in which to rebuild these ruins collectively. “I’m making a new social space—physical or imagebased. I want to make a new space for interactions.”