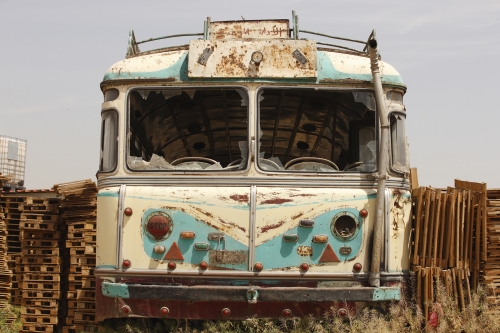 Syrian artist Jaber Al Azmeh's latest series of photographs, Traces, does not feature people. But the artist likes to call them "portraits" because they are about people. The pictures of rusted oil barrels, dilapidated houses and abandoned cars say a lot about the people connected to these places and objects. They also compel us to think about the impact human beings have on the environment.

"The people who once lived in these houses or drove these cars are not in my frame but they passed through it and left behind these traces of their lives and personalities. I cannot help wondering about them. And I hope viewers will also connect with these images and find interesting stories in them," the artist says.

The photographs are visually striking and beautifully composed. A view of a metal shed taken through a pipe is a captivating arrangement of lines and circles, light and shadow and different shades of brown. In another picture, the fresh green shoots of a plant make an interesting contrast to the hard steel, peeling paint and patches of rust on a carriage from an old steam train. Another image features the door of a simple village house. Written by hand on the door are several messages, which include verses from the Quran, funny proverbs, a phone number and a request to knock softly. "As a graphic designer, I have an eye for visually aesthetic arrangements. My compositions are done instinctively on site and I never alter my photographs digitally. And I do not give them titles so that their interpretation is not limited by my imagination," Al Azmeh says.

But there is much more to the images than mere visual appeal. They make witty and thought-provoking statements about people, society and the passage of time. And they make us think about the things that shape our lives, about our attitude to life and about the legacy that we want to leave behind.