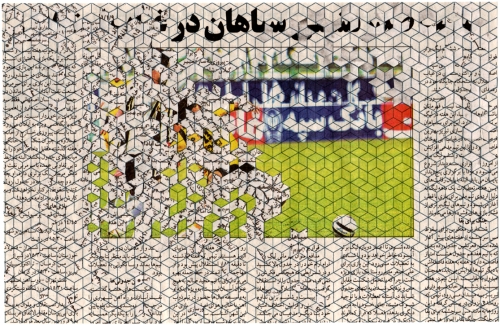 Since the invention of the camera, photographic images have been one of the most important ways of reporting news and recording and preserving our history. People generally tend to believe that a picture is a truthful depiction of reality and history. But the fact is that images can be manipulated, and they often are. We know that they can be altered by modern digital technology; but we should also be aware that pictures can be distorted by the viewpoints, biases and motives of those who create them and by the contexts. We must also realise that our perception of people, events and objects are influenced by the way they are portrayed by the image makers.

Challenging the idea of the image as truth is the central theme of an exhibition titled “A Permanent Record For Future Investigation”. The show is curated by New York-based Iranian artist Kamrooz Aram, whose own work is focused on questioning the creation of a false history of Eastern cultures and renegotiating certain histories. He has brought together five women artists from different parts of the world whose work explores the history of image making and the notion of the image as historical document. They include Tehran-based Nazgol Ansarinia, Talia Chetrit, who lives in New York, Egyptian artist Eman Eisa, Mehreen Murtaza from Pakistan and Hajra Wahid. The artists have found innovative ways of blurring the lines between documentation and fiction to show that the meaning of objects and spaces depends on the context in which they are seen and that the reality and truth of an image are subjective and malleable.

Ansarinia takes inspiration from her Iranian heritage to comment on biased news reporting in the media. In her series, “Subtractions/Refractions”, she has created collages using two radically different articles about the same event from two different newspapers. The articles have been cut into many small pieces, and carefully assembled in the form of traditional Iranian mirror mosaics. “When you look in a mirror, you expect to see a true reflection of yourself. But what you see in these mirror mosaics is a kaleidoscopic distortion of reality. Similarly, the role of a newspaper is to reflect the reality within society. But when you read two different perspectives in two different newspapers, it becomes evident that reality is subjective and depends on the storyteller’s perspective. Like the mirror mosaics, my newspaper mosaics are visually attractive, but do not give us a true picture of the event,” the artist says.