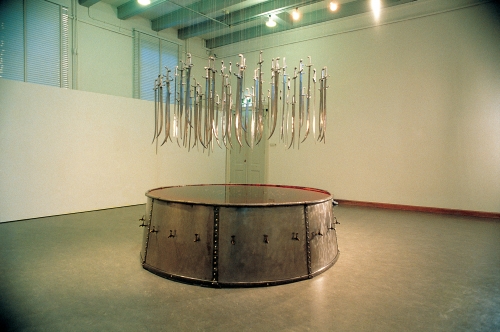 Though shown at Galeri Nev before the Gezi Park protests in May, Hale Tenger’s video of the three wise monkeys swaying to a Frank Sinatra hit, Swinging on the Stars (2013), embodied what had been the city’s defining, stagnant mood, this pervasive, cynical humour. As a political allegory, it addresses the Turkish Republic’s refusal to recognize its numerous crimes of neglect and abuse against its own citizens. Applied to the art community, the dancing creatures of Swinging on the Stars could be read as a gloss on how organizations here present themselves in one way to the outside world (‘Smile!’) – eager for recognition and respect – while ignoring (‘I can’t hear you!’) the deficiencies and hostilities at home. Out of necessity, young people with vision and motivation – whether as artists, curators or dealers – will have to establish their own structures, free of the old order’s shackles and prejudices, to circulate and survive in this self-engorging megacity. No matter how informal or transient these organizations end up being, they already have more potential to break the city’s gridlock than anything that exists in Istanbul now.