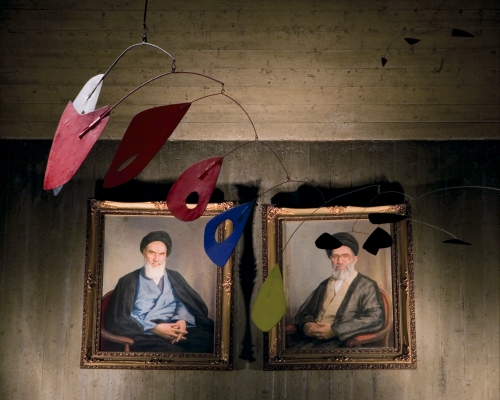 Alexander Calder’s performing mobile Orange Fish (1946) at the Tehran Museum of Contemporary Art (detail). From the series Cultural Diplomacy: An

Something repeated is not necessarily a mere copy, an inadequate illusion strewn on the postmodern battlefield of vain formal quotations. It can also be rendered productive - if it provides the setting for a new, altered mode of action and understanding. In this spirit, Venezuelan-born, Berlin-based Alessandro Balteo-Yazbeck's first solo show at Galerie Martin Janda was based on recurrence: versions of this artistic and curatorial project have already been shown at US galleries in 2009 and 2010 and at the 12th Istanbul Biennial. Even the exhibition title, Cultural Diplomacy: An Art We Neglect was a quotation, borrowed from a piece published in The New York Times by art critic Aline Louchheim in 1954. In it, she bemoans her government's failure to fund an official US presentation at the second Sao Paulo Biennial in 1953. Instead, it was New York's Museum of Modern Art, under its then president Nelson Rockefeller, that put on a prominent retrospective of work by Alexander Calder - the artistic poster boy for American 'cultural diplomacy' and a not always entirely voluntary messenger for the American myth of liberty.

This quotation goes straight to the core of Balteo-Yazbeck's works, made jointly with art historian Media Farzin: the magical hegemonic triangle of political, economic and cultural power enjoyed by the US on the international stage from the time of World War II, through the emerging Cold War to the McCarthy era. Opposite the entrance to the gallery hung the most striking piece in the show, Didactic Panel and Model of Alexander Calder's Vertical Constellation with Bomb, 1943. From the series: 'Cultural Diplomacy: An Art We Neglect' (2007-09). The work consists of a panel with a picture of Calder's Vertical Constellation with Bomb (1943) with relevant quotations from Calder concerning the structure of his Constellations and a replica of the work. All of these elements have been modified from their originals: Calder's delicate stabile made of wood and wire is translated into hi-tech materials like ABS, Plexiglas and carbon fibre.