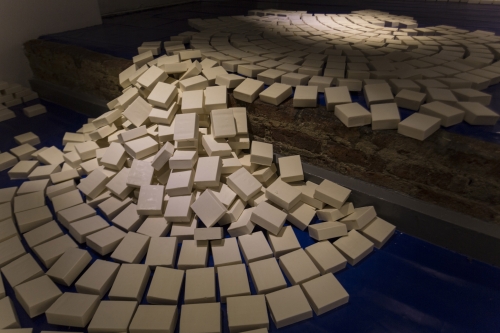 Soap and Vinyl, Dimensions variable according to space

The archaeological record, a body of physical evidence about the past, is often hidden in plain sight; urban growth exposes it more often than it destroys it—there's just too much of it. In an ancient metropolis like Istanbul, it becomes impossible not to tamper with the evidence of the past, in the course of the simplest intervention. At the outermost layer, there's a flimsy and irregular topography under which lurk many subterranean layers, and whatever is exposed of the archaeological record becomes irreparably damaged in the process. It's not only that, but also that later on, the damage becomes part of the record, irretrievably falsifying it.   Is it possible, perhaps, to practice a noninvasive archaeology of art and culture that can read records without ripping them apart?

From the Princes Islands, an archipelago in the Marmara Sea, 20 km from Istanbul, Greek-Armenian artist Hera Büyüktaşçıyan travels daily to her studio in the now derelict Tarlabaşı neighbourhood, (itself a falsified archaeological record: an early 20th century modernist quarter now turned into a slum, slated for aggressive gentrification) seeking to answer this question.  As both witness and record, Büyüktaşçıyan inhabits a world of ambiguity, as her role is shaped by autobiographical narratives of exile and return between Turkey and its earlier Greek past. Yet this narrative is compounded also by the larger journeys of Armenians, from the Venetian island of San Lazzaro, to the Indian subcontinent. The apparently short ferry ride between the Princes Islands and Istanbul encompasses hundreds of years since the foundation of the city in the 7th century BCE, through a long epic of prisons, monasteries, holiday homes for the elite, and subsequent expulsions—the borderline between legend and history isn't clear.

Büyüktaşçıyan, the storyteller, articulates this historical voyage through shapeless balconies and architectural structures (The Land Across the Blind, 2014, Galeri Mana) that do not follow logic, yet upon closer inspection, are neither real nor unreal, but narrative devices. At a time when Turkey became engulfed by a long-lasting political crisis, these fragile elements turned into memory checkpoints also of the present. However, noninvasive archaeology can reveal only fragments, therefore the viewer needs to do his own detective work, and search for clues.