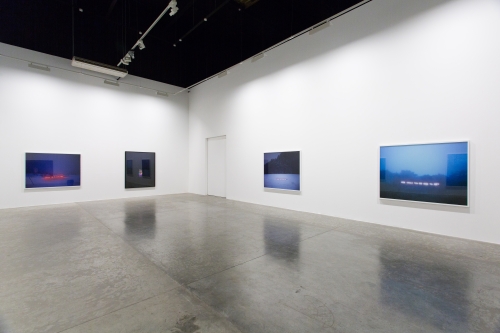 The lover’s language is a lonely affair. It may be spoken by many, but it is ultimately gripped by solitude. Such is the conclusion shared by both French philosopher Roland Barthes and Jung Lee, a Korean photographer whose debut solo show in Dubai showcased work inspired by the Frenchman’s book A Lover’s Discourse, his hard-to-classify study of love-in-language.

“How Could You Do This To Me?” “I Still Remember.” “You, You, You...” “Why?” These forlorn utterances of love-speak become, in Lee’s “Aporia” series, painstakingly photographed neon signs set in desolate, fog-shrouded landscapes. Neon, the one-time mainstay medium of urban advertising’s sloganeering, has been exiled into forsaken Asian hinterlands. Far from its brash city bellowing, the light bleeds mutely into the snow, or hovers tenuously over a tangle of dead trees. The word-sculptures themselves seem somehow alive — less actually placed somewhere than captured in action. In “I Still Remember,” for example, the oddly fragile lower-case letters fade into the engulfing snow bank, relinquishing control, the background an indifferent blur of pines.

While Lee’s strategy may seem naïve (she counts on the photographic context to lend vulnerability to the clichéd expressions, triggering the hoped-for viewer projection of some personal love-speak memory), there is still great poignancy to this work. The weight of nature overwhelms: the enormity of the unforgiving land dwarves the fragile neon sculptures — tiny lit patches against an unwelcoming expanse. The voice behind these utterances is complex. The first person “I” speaks to the presumed love-object who cannot or will not answer — or perhaps to the viewer? We willingly accept that these overused lines have become meaningless, yet the deft mise-en-scène almost endows them with new significance. In “You, You, You,” for example, the neon pronoun metastasizes in an ivy-riddled thicket, spreading like an obsessive echo amid conquering weeds.

Lee’s abandoned words somehow foreground the very impossibility of language. To speak about love, reminds Barthes, is to confront “the muck of language,” where its hopelessness resides in the fact that it is at once too much and too little.