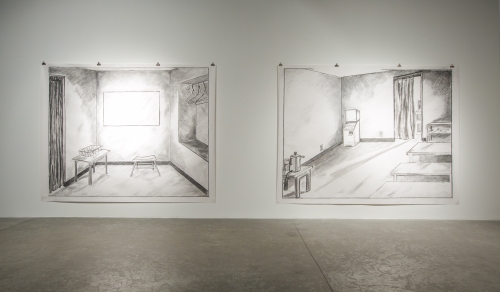 Is memory a kind of property? If so, who is the landlord? In the aftermath of what Jalal Toufic calls a “surpassing disaster,” damage is not only material but accompanied by cultural withdrawal. The negotiation of loss and the act of making destruction visible, via proxy, is at the core of New York-based Palestinian artist Shadi Habib Allah’s solo show at Green Art Gallery. The exhibition is based on an incident that occurred while the artist was going through pre-flight security at Ben Gurion Airport in Tel Aviv. Stopped and questioned about a sculpture in his possession — a plaster cast of a leg — the officials were dubious about the aesthetic intent of the representational limb. The interrogation continued up a chain of Kafkaesque command. The artist subsequently conveyed the affective state of being cross-examined inside a site of total bureaucratic control via a short video with subtitles; the work depicts two balloons gently pushing against the ceiling of a room, thus enacting a Sisyphean failure to escape.

Habib Allah was separated from the artwork and heard about, but never witnessed, the destruction of the leg. Its absence — as a refrain in the video insists — “complicates movement.” The installation attempts to reclaim the act of destruction, through the involvement of “objective” outsiders, in order to re-appropriate the agency of memory and its relationship to a traumatic event. As a way of affirming that this crime did in fact occur inside the existential and occluded space of bureaucracy, the artist asked a security guard working at the airport to sneak into the restricted access room where the forceful negation of the sculpture took place. The guard provided an account of the space to a retired NY Police sketch artist who rendered three views of the room, which Habib Allah transposed into three life-size drawings. The work deftly maneuvers the polemic-laden politics of the region to shift the frame, opening an investigation into the role of art and its capacity to reconfigure memory — a memory that is no longer proprietary but functions as a shared commons.