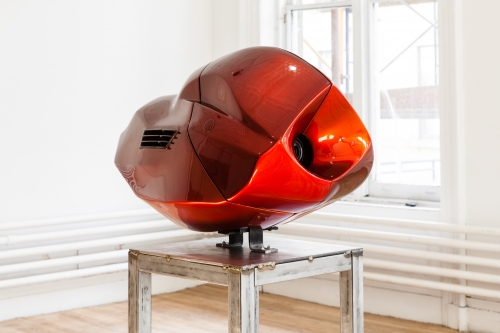 In his essay accompanying the 1977 exhibition Pictures at Artists Space, and in a subsequent text published by October in 1979, the art historian Douglas Crimp introduced the work of a generation of artists, and their use of “quotation”, “excerptation”, “framing”, and “staging”, that has since become synonymous with the postmodern relationship to pictures.

Frozen Lakes examines the prominence that these artistic strategies have for a generation of artists born after Pictures. It equally attests to the changing nature of critical inquiry within today’s economy of image production, and the shifting relationship between information and meaning.

The temporalities that Crimp identified in Pictures – “the staged tableau”, “the freeze frame”, “the historical fragment”, and “the fascinated, yet perplexed gaze” – sought to highlight the picture as a “signifying structure of its own accord”, usurping the reality that it claims to interpret. The contemporary experience of images is saturated with a heightened notion of temporality: signifying structures circulating and performing through networks of value, desire and exchange. The sense that pictures occupy very distinct places in culture, and reveal a vertical “strata of representation”, has been replaced by fluid, maybe even liquid, modes of accumulation and aggregation.

The artists featured in Frozen Lakes shift their attention from the dialectics of production towards the conditions of circulation. Here, the image can be seen as a series of gestures; as a vessel inhabited by, as much as it conditions, behaviors. Filmmaker and writer Alexander Kluge has used the phrase “frozen lakes” to speak of montage, as a means to create “still images” as a technique of focusing.

By addressing the conditions of circulation as a sphere of exchange and value attribution, and as a site for the formation of desire, Frozen Lakes focuses on the blurred states between opacity and transparency. From the mediations between information leaks and brand images, to the rendering of digital surfaces as an extension of corporeality, these processes question the experience of “presence” as integral to the “establishment of meaning.”