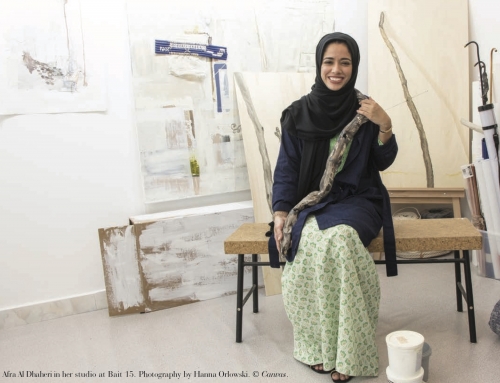 You'd be forgiven for thinking that Bait 15 was just a regular villa or house (which is what “bait” means in Arabic) numbered 15, until you step onto the front porch. On the side wall to the entrance, past the courtyard, is a painting by Finn Murray-Jones, Sabeel (2018), which depicts three gleaming black taps, looking dramatic underneath a neon strip of green light. Inside, one of Lamya Gargash’s evocative photographs of empty interiors, My Great-Grandmother’s Bathroom (2005–6), is striking. A marine blue tiled bathroom with a chair and bucket positioned inside the shower, it hints at elderly care. In the centre, several arrows pierce the body of an impromptu wheelbarrow-like sculpture by Russell Hamilton, The Residents Last Stand: Chief Red Beard (2011), a reference to his Native- American roots. Adjacent is a recognisable series by Mohammed Ahmed Ibrahim, Sitting Man (2013), of a headless gure whose hands rest on his thighs, repeated in di erent colour combinations.

“There’s another work by Ibrahim upstairs,” Afra Al Dhaheri explained, referring to an abstract painting in the Emirati artist’s signature blocks of colour. “He had given it to the poet Ahmad Rashid and when he passed away, his family, who were trying to dissolve his estate, handed it to Mohamed Al Mazrouei, who lived here before us.” Al Mazrouei is an Egyptian-born self-taught painter, writer and lmmaker who moved to Abu Dhabi in the 1980s and established himself by working for The Cultural Foundation and managing the Emirates Writers’ Union.

“The work was made just before Ibrahim burned all of his artwork in 1999 [in a semi-performative act], so it was a survivor in a way,” Al Dhaheri continued. “We had a lot of discussions about whether it should go into Ibrahim’s gallery [Cuadro] and agreed that it should stay here, where it was found, in the house.”