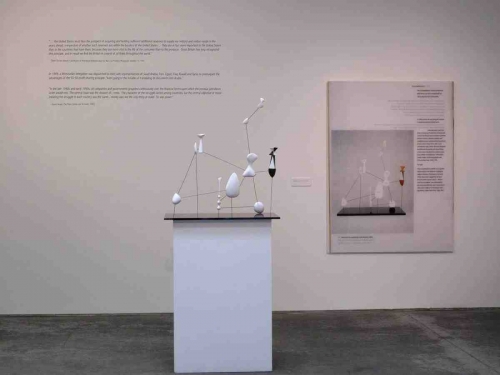 Collins’s remarkable invitation card is part of the raw material of a sprawling, ongoing project by artist Alessandro Balteo-Yazbeck and art historian Media Farzin. Part research endeavor (the two spend a great deal of time with their heads in archives), part historiography, part exhibition-as-conceit, their project takes modernism’s vexed and storied entanglement with the political as its point of departure and inspiration.

In a recent iteration of their project at Christopher Grimes Gallery in Los Angeles, under the enigmatic rubric “Cultural Diplomacy: An Art We Neglect” (the title was the headline of a 1954 article in The New York Times Magazine), an ambulatory museographic display spread across two rooms included everything from wall charts, documentary photographs, and sculpture to facts, figures, and quotations. The experience of standing in the gallery space evoked the feeling of walking into an exhibition of modern art (Calder-like mobiles abounded), the lobby of the United Nations, and a natural history museum, all at once. Still, the question of whether Balteo-Yazbeck and Farzin’s gesture is artistic, curatorial, or polemical in nature seems an unnecessary one. Open-ended and polyphonic as it is, it was all of that and none of that, and therein may lay its greatest strength.