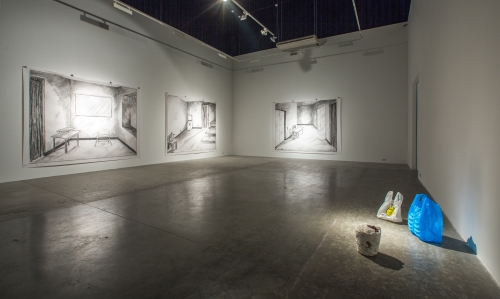 This exhibition by New York–based Palestinian artist Shadi Habib Allah was inspired by an incident in 2009, when, traveling from Tel Aviv to New York, he was stopped at Ben Gurion airport and questioned about a sculpture he was carrying—a cast of a leg he had made in Palestine. After he was subjected to much interrogation, the sculpture was taken from him and eventually destroyed without his permission or knowledge.

Titled “Evacuated Containers,” the show was anchored by three large-scale graphite drawings that envision the high-security room in which Habib Allah’s sculpture was destroyed, though he has never seen it. Instead, he contacted a security guard at the airport, and asked him to gain entrance to the room and then describe it to a police sketch artist.

The artist made detailed images from the guard’s recollections and oral testimony that were then redrawn by Habib Allah on a one-to-one scale. Exhibited on the gray-painted walls of the gallery, the drawings appeared to extend the space within the room like a ghostly apparition, and evoked the approximation of memory and perception.

In an accompanying video from 2013, WOW, two balloons float against a black screen while Habib Allah gives a detailed account of the airport incident in a voiceover narration. As he describes what happened and explains his encounters with security personnel, his story seems sketchy and unreliable. And it is, indeed, just as likely to contain error and bias as the account that the guard gave of the room, and just as subjective as the decision that led the airport staff member to categorize the sculpture as suspicious rather than benign. The irreconcilability of personal perceptions and experiences is suggested by the image of the balloons, floating at varying heights in the same black void.