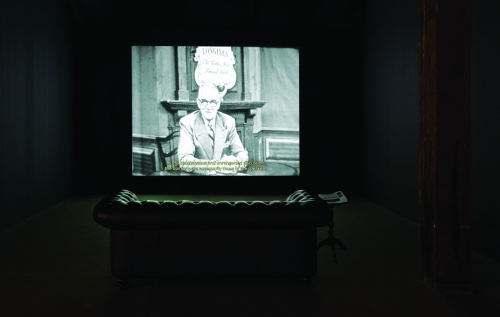 Alessandro Balteo-Yazbeck and Media Farzin have been awarded the inaugural Moving Image Award and their winning work will be in the permanent collection at Tate Modern.

“Chronoscope, 1951, 11pm” is a video installation of six episodes of an American current affairs program called “The Longines Choronoscope” that dates back to 1951. The core of the program selected for the instalation reported on the situation in Iran after Mohammad Mosaddegh nationalized the country’s oil industry. These episodes took place before the 1953 coup by the British and American secret services. This installation questions notions of authority and propaganda in 1950s America in the height of the Cold War.

The episodes chosen examines their coverage and their strength and influence over America in a time when broadcast was the dominant medium for news.

"‘Chronoscope, 1951, 11pm’ highlights the convergence in the early 1950s of images, information, global politics and the emerging cultural dominance of broadcast media. Through careful research and clever appropriation, Alessandro Balteo-Yazbeck and Media Farzin provide an archaeological approach to media and a blueprint for understanding the intricacies and contemporary legacies of the Cold War,” said Tate’s Curator of Film, Stuart Comer, who selected the winning piece.

This video installation merges the work of an artist with an art historian. Balteo-Yazbeck has been actively producing art since the mid-90s and his work often question authority and examines at cultural representation. Farzin is a New-York based art historian whose research looks at language-based performative arts in the 1960s and 1970s.

The Moving Image Award was created to honor American couple, Pamela and Richard Kramlich, who were early supporters of the film medium. The prize granted Tate Modern $10,000 USD to acquire a new work from the Moving Image Fair to be a part of their permanent collection to help further advance and understand technology-based arts.