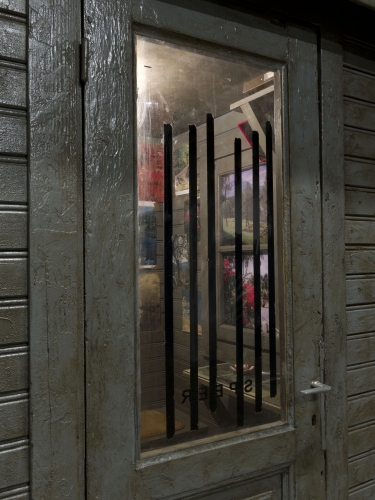 Hale Tenger, We didn’t go outside; we were always on the outside / We

In 1995, Hale Tenger’s contribution to the fourth Istanbul Biennial was a portrait of her country as a cramped, one-room guard house, cordoned off in a concrete yard by a towering barbed-wire fence. Inside the structure were the barest necessities for passing time in the isolation of guard duty; walls were plastered with postcard scenes of natural wonders, including some of Turkey’s most breathtaking vistas. The images indicate that whoever served their time in that space dreamt of life outside the fence, suggesting the guard as a kind of prisoner. This play of perspective echoes in the installation’s title—We didn't go outside; we were always on the outside/ We didn’t go inside; we were always on the inside—which flows almost like a call-and-response chorus of an old song. Fittingly, the only company kept within this guard house comes via a battered transistor radio, which here crackles out a rotation of old-timey tunes. While the artist proposed the installation as a metaphor for Turkey’s geopolitical isolation, the presence of the radio subtlely implicates the government’s hand in that isolation, namely the monopoly on radio programming, which was under direct state control from 1923 up until ’94.