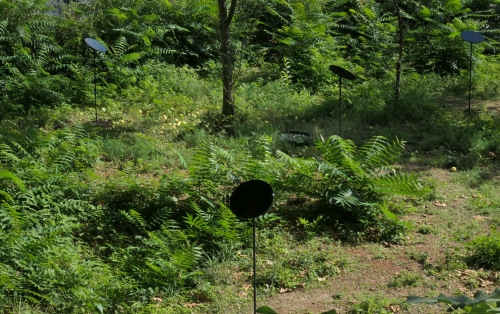 One notable work in this especially lackluster part of the show is Hale Tenger’s minimal intervention in the overgrown garden of a stone mansion uphill from the club—the former summer residence of a nineteenth-century patriarch of Constantinople, repurposed as a primary school around the time of the establishment of the Turkish Republic under Atatürk. Appearance, 2019, dots the garden with a handful of round black obsidian mirrors, while unintelligible, hushed voices materialize all around with no apparent source. If you stand by the apple tree, you may be able to finally make out the recitation of a poem about girdling—the practice of wrapping a strip of bark around the trunk of a tree to overstimulate fruit growth, which eventually kills the tree. The last line of the poem is spoken in a barely audible whisper: “Can you be by not doing?” The most overpowering sight in the biennial is steps away. At this height, the garden commands a view of the Asian side of Istanbul endlessly extending southward, a giant vale of glass facades reflecting the sun’s glare as the forests helplessly recede toward the hilltops beyond. It seems safe to assume that Tenger’s simple, mindful plea against the desiring machine that is the Capitalocene will go unheard by most, including those in charge of decision-making and funding for the Biennial.