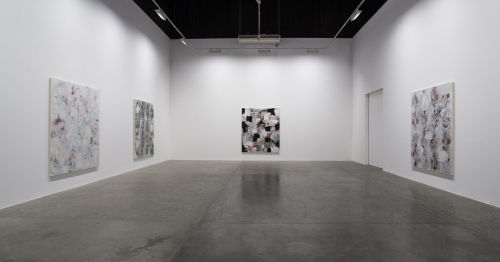 For his first solo show in Dubai, painter Kamrooz Aram has taken his ongoing interest in erasure up a notch. Adding to his reductionist repertoire of wiping off, sanding down, and scraping away the surfaces of his large canvases, Aram, in the aptly named “Palimpsest” series, introduces the near-universal gesture of the graffiti cover-up. Culled from the urban landscape, where wayward wall scrawl is obliterated by fretful officials or grumbling building owners, this potent gesture of overwriting an image (and thus creating a surface on which to layer a new graffito) is tangled up in Aram’s wider interrogation of abstract painting’s potential to engage social issues.

Echoing power shifts and political overthrows—the syncopated succession of old regimes, new republics, and intermittent revolutions—Aram’s surfaces are sites of upheaval and destruction, erasure, and excavation. Each of the seven works shown comports a grid-based configuration of flower graphics plucked from Persian-carpet motifs. Occasionally rubbing shoulders with signature modernist shapes such as triangles and dots, the floral elements are awash in a maelstrom of sweeping, blurring strokes, circular rub-outs, and the hasty back-and-forth marks of the cover-up.

The work is at once highly visceral and technically nimble. Maspeth Rituals (Palimpsest #14), 2013, for example, toys with pictorial space, ground, and field: A graphic black cover-up seems from a distance to be a superimposition, but closer inspection reveals it’s an underlayer. Modernist games abound in the painting Backdrop for the Structural Harmony of a City (Palimpsest #16), 2013, as triangles connect the flowers’ central dots, which occasionally also explode into larger circles.

Subtly penciled-in dates sometimes intervene amid the surfaces, as in Resistant Forms in Uncertain Space (Palimpsest #27), 2013. Here, the temporal nature of mark-making joins the already heady concerns at play in these works: Every mark marks a moment. In the complex layers of Aram’s masterful Palimpsests, temporalities, as much as images, are struggling to be seen.