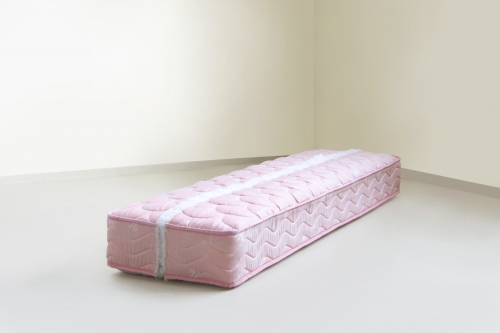 There is a sobering rawness in the works of five Cuban and three Middle Eastern artists brought together by curator Sara Alonso Gómez. United by minimalist and conceptual approaches, the pieces poetically embody tension, expressing concern about general states of complacency within various social, cultural, and political spheres. For Citizen of my world, 2018, Ghaith Mofeed has cut and stitched together a map that places Syria at the center and highlights the few countries that welcome Syrian nationals. In Fatma Bucak’s video Scouring the Press, 2016, three women wash text from Turkish newspapers to rewrite histories of repression, migration, and violence among minority populations. Wilfredo Prieto’s barbed-wire floor installation Anti-pigeon lines, anti-personnel lines, 2018, with its imposing, haphazard arrangement, indicates that from any and every standpoint, there is exclusion.

Reynier Leyva Novo’s photographs prove most visceral. Alongside archival images of Mao, Castro, and Franco are enlarged copies of the same images with the figures effaced; an abandoned audience, not knowing upon whom or what to look to, observes dark television screens or holds blank propaganda posters. The removal of the figures asserts the arbitrariness of fact––just one adjustment can profoundly impact what is remembered or forgotten.

Remnants articulates the ways in which people, objects, and ideas are physically and psychically manipulated into obscurity by sociopolitical and subjective exclusion. Presenting both alternative possibilities and confrontations with overlooked truths, the exhibition exposes the dangers of both purposeful and unintentional oversight. It doesn’t clarify if there is hope for the remains to be reinstated, but these artists show that they aren’t standing by the wayside, even if it is a losing battle.