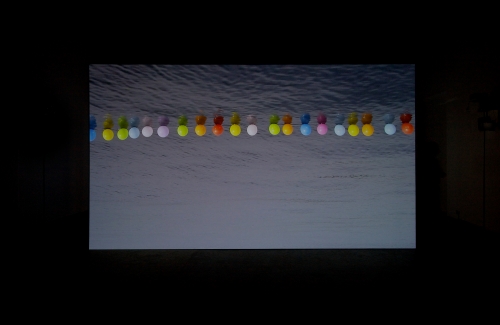 Balloons on the Sea, Hale Tenger

Though Hale Tenger strives to avoid repetition in her diverse array of installation, sculpture and video work, there nevertheless remain certain crucial recurring themes, and the critique of power looms large among them. In some works the 51-year-old Turkish artist is blunt in her examination of the male-dominated political arena. I Know People Like This II (1992), first shown at the 3rd Istanbul Biennial in 1992, is a wallmounted installation of brass statues of tumescent gods and the Three Wise Monkeys (who hear no evil, see no evil and speak no evil) arranged in a pattern of stars and crescents resembling the Turkish flag. Accused by the police of violating the penal code and degrading the national flag, Tenger was taken to court, although after a year the charges were dropped. Unbowed, Tenger continued to make work in the same vein, as in Turkish Delight (2003), a white terra cotta figure of the Greek god Priapus decorated with patterns from Iznik ceramics, with grapevines creeping up the length of the deity’s enormous erection.