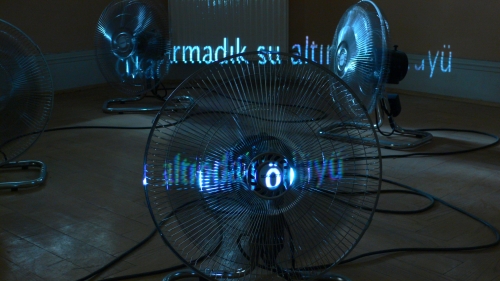 The room is dark and breezy. Slits of light come in through the old wooden shutters. Sixteen metal fans placed on the parquet floor are humming away, their sinuous black cables covering the surface. A single projector, sitting just off the ground in the middle of the room, pivots around the room shining the alternating phrases “Çıkardık mı su altındaki ölüyü” and “Çıkarmadık su altındaki ölüyü” in white letters onto the bottom of the walls and over the steel grilles of the fans: “Didn’t we pull the body out from underwater / We didn’t pull the body out from underwater.” The words are distorted as they move over the architectural features and are sliced up by the grilles, which reflect little shimmers of light over the floor. The moving air at first refreshes, then chills.

Hale Tenger’s Where the Winds Rest (2007) was originally created for the first edition of the Port İzmir 07 International Contemporary Art Festival, “Mirage and Desire,” which ran for one month beginning on September 7, 2007, with 20 artists, ten of them Turkish, the rest French and other Europeans. The program was initiated by Jean-Luc Maeso of the French Cultural Center and was curated by Emmy de Martelaere in collaboration with Ayşegül Kurtel of İzmir’s K2 Contemporary Art Center. One of the venues, chosen by Tenger, was a stately home located across from the Alsancak train station. Its residents long gone, the house had been built in the mid-19th century for the director of the British-run railway—the first in the Ottoman Empire—that ran from İzmir on the west coast to Aydın, 100 kilometers to the south.