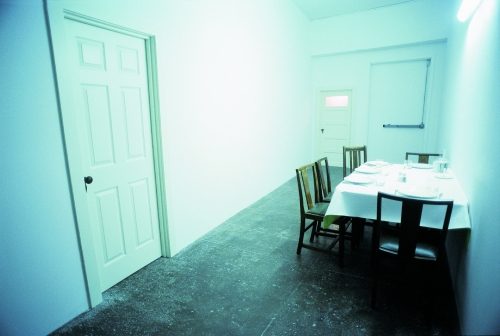 housewares, lamps, books, clothing and other textiles, and audio

When Hale Tenger first created The Closet in 1997, its oppressive, and depressive, atmosphere was meant to recall the stifling climate of Turkey during the brutal military dictatorship of the early 1980s—the home becoming a metaphorical space for the homeland, where, in those days, darkness and silence reigned, and where the security of the interior was infiltrated by threatening events happening outside. Yet, when Tenger re-created this installation in September 2015 for the group exhibition “How Did We Get Here,” which surveyed the cultural life of the decade following Turkey’s September 12, 1980 military coup, the implicit comparison between the early 1980s and the present was unavoidable. Since the government had renewed armed conflict with Kurdish guerillas in southeastern Turkey a few months earlier, in July 2015, and launched an increasingly repressive campaign against media outlets, opposition parties and civic groups, people had begun debating whether the country had returned to the dark days of the 1990s, 1980s or earlier. Though nearly 20 years old, The Closet felt all the more timely for evoking the past that people fear the present increasingly resembles.