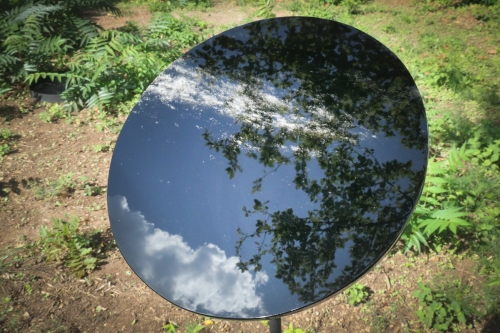 On Büyükada, the strongest project was Hale Tengerʼs Appearance (2019), which features a whispering voice projected from an abandoned stone mansion to its overgrown garden below, where the artist had placed circular disks of obsidian —the mystical black mirror—on the ground and on stands beneath the fruit trees. Glenn Ligonʼs mini-exhibition at Mizzi Köşkü Mansion was based on James Baldwinʼs time in Istanbul in the 1960s and early 1970s, and included a projection of Sedat Pakayʼs moving short film following the African-American novelist around the city. Ligonʼs own contributions were a large strand of red lights spelling out an upside-down “AMERICA” in the manner that mosques string up Ramadan messages between minarets; a pair of red-neon signs of politically charged dates in Turkish (March 31, 2019, the date of Turkeyʼs recent and disputed municipal elections; and October 29, 2023, the 100th anniversary of the Turkish Republic); and two videos of contemporary Taksim Square with jazz soundtracks. While I generally admire Ligonʼs works (and Baldwinʼs writing), this constellation bordered on the superficial.