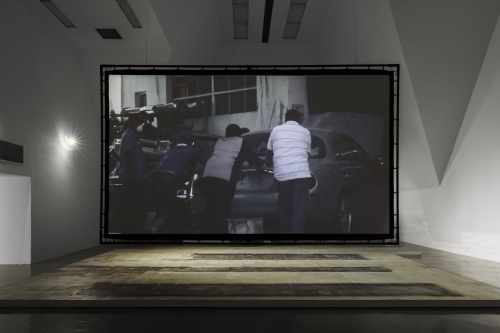 Installation view at The Renaissance Society

Drawing on extensive fieldwork, Shadi Habib Allah sifts through intricate social and legal relationships to find their aesthetic traces. His work distills complex alternative economies into video works and spare sculptural pieces. Habib Allah’s solo exhibition, “Put to Rights,” is on view at the Renaissance Society in Chicago through November 4. Along with three older videos about illicit subcultures, the show features new work that explores how corner stores in Miami’s Liberty City neighborhood use false records to track and cover up the trade of cash for food stamps. These pieces document the physical manifestations of this clandestine economy, while subtly critiquing the social policies that force storeowners and recipients of public benefits into mutual dependence. Habib Allah also has an audio installation and a sculpture based on his Liberty City research on display at the Hammer Museum in Los Angeles through January 20.

Born in Palestine, Habib Allah studied at Bezalel Academy of Arts and Design in Jerusalem and received an MFA from Columbia University in 2010. He is based in Miami. His earlier work explored such disparate subjects as Bedouin smugglers in the Sinai Peninsula, ghost stories in Jerusalem, and the trade in stolen electronics and auto parts in Miami. Habib Allah spoke to me via Skype while putting the finishing touches on his Chicago show and then again by phone while installing the project in Los Angeles.