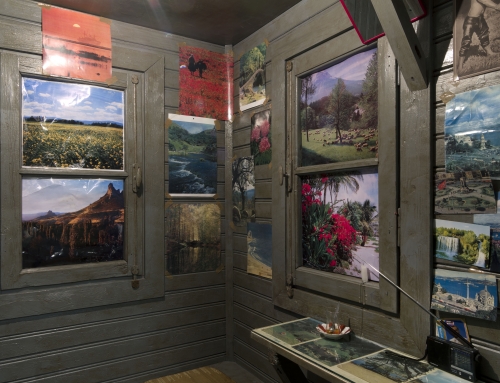 Hale Tenger, We didn’t go outside; we were always on the outside / We

Hale Tenger’s 1995 installation We didn’t go outside; we were always on the outside / We didn’t go inside; we were always on the inside, a commentary on Turkish politics in particular and state repression in general, is as disturbingly relevant today as it was 20 years ago. It was restaged by the Istanbul- and New York-based arts organization Protocinema in the basement of New York’s historic Westbeth Artists Housing buildings to make just this point. The eerie work consists of an old wooden guardhouse in the corner of a large concrete yard enclosed by barbed-wire fencing.

Inside the cramped guardhouse, in stark contrast to the bleak environment outside it, faded postcards and pictures of idyllic Turkish landscapes cut from magazines are taped to the walls. The only other suggestions of human habitation are a mirror and a tiny transistor radio emanating a loop of popular Turkish folk songs, a reference to state control of radio broadcasting and other media from 1923 to 1994.