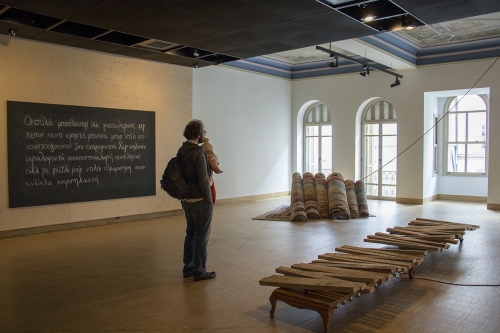 Curated by November Paynter, “A Century of Centuries,” recently held at SALT Beyoğlu in Turkey, presented an unfolding dialogue between various individual artistic positions. Each exhibited work was formed in response to transformative moments, traumatic experiences and social transitions of the past that continue to resonate in, and shape, the present. Cumulatively they expressed the repetitious nature of history and the dark legacy of the past century. The exhibition coincided with—and was haunted by—the centenary of the Armenian genocide of 1915, which was commemorated internationally, but unrecognized by Turkey, where the historical incident had taken place.

The galleries of SALT were infused with the creaking sound of Hera Büyüktaşçıyan’s poetic installation Destroy your house, build up a boat, save life! (2015), where wooden planks suggesting the form of a boat move slowly in sequence, mark the passing of time. Büyüktaşçıyan engaged with the history of SALT’s building, home to many minority communities during the last century, by uncovering a ceiling painting from that time. Rolled up carpets, also part of the work, speak of the Greek population of Istanbul who were forced to pack up and leave the city during the 1950s. The work’s title evokes Noah’s Ark, and the act of taking only what is necessary in order to rebuild a life once safety is reached—the mythic fantasy of a new beginning.