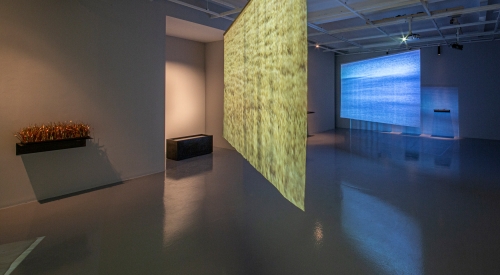 Where The Winds Rest, Hale Tenger

“Did we pull the body from underwater?” Letters that pop up from a pitch-black sculptural box form this eery sentence that could have been used in a film noir. It is, in fact, a stanza by Turkish poet Edip Cansever.

“Cansever is one of my favorite poets. I have quoted some of his verses either as titles or integrated them into some of my works,” said Hale Tenger, an artist who held her first solo exhibition in seven years in a gallery months ago.

Tenger's first use of Cansever's poetry goes back to 1995 when she recreated a guard booth placed inside a barbed-wire zone. The work, which was a site-specific one created for the 4th Istanbul Biennial, was destroyed at the end of the exhibition but was reconstructed in 2015 with nonprofit Protocinema in New York. It is now exhibited at Istanbul's Arter museum. “It also took its title from one of Cansever's stanzas: ‘We didn't go outside, we were always on the outside / We didn't go inside, we were always on the inside.’ It has been 25 years, and now it is included in one of the inaugural shows at Arter, and unfortunately, it is still extremely relevant to today's conditions,” Tenger told Al-Monitor.