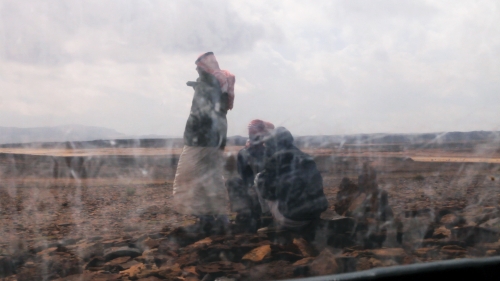 The project considers gestures of protest, unrest, and incendiary exchange as the starting point to a conversation. Multimedia works and formats on view represent images of conflict and strife that are oftentimes stripped of their original or intended context. Considered together, they function more as dispersed, floating representations of contested moments in time that refuse to stand fixed, and instead vehemently call for another engagement with the world, an imagined world. Further acknowledging our existence in a particularly mediated culture, artists employ various strategies of replication, dislocation, and obfuscation to explore the idea of the real and to challenge the particular and varied contested sites around them. By doing so, they both individually and/or collectively call for a halt. This interruption, this blockade, provides the space necessary to reflect on constructions of political and social inequities that will not be accepted as the status quo. It further upholds the agency of both the individual and the collective act to challenge notions of progress that are subsumed within a neoliberal agenda. As such, the action, the protest, and/or the withdrawal from society leave the viewer witness to the performative gestures, as well as the symbols and sounds that offer an opening to another reality, to a life that could be lived in another way.

I can call this progress to halt attempts to provide a space in which timely topics can sidle in as wanted companions through the lens of the visual. The project does not situate itself within a single locale, but rather considers a multiplicity of sites and temporalities through the layering of physical and imagined spaces.