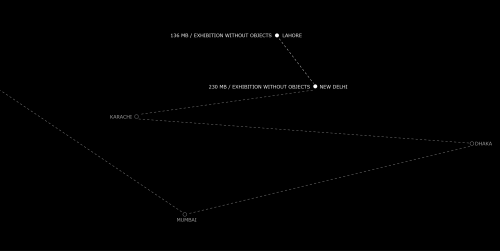 EXHIBITION WITHOUT OBJECTS (EWO) unfolds from an initial conversation that begins with a letter of invitation from the curator to the artist. Instead of showcasing art objects, the artists are asked to create digital narratives that play with the ubiquitous format of the PowerPoint, a standard (izing) presentation medium that is used by individuals from the military, academic, financial, corporate and art worlds alike to share their work. In addition, each artist has paired their PowerPoint with an “event” that further interrogates or explicates the themes introduced by their respective slideshow.

The artists’ PowerPoints in 230 MB / EWO range from more exploratory text based works to those mining image based archives. Several of the artists responded to the exhibition’s formal constraints by creating “events” that took advantage of the absence of objects — for example, by working with the non-object based materiality of sound or by offering conceptual proposals in lieu of performance-based events. Other artists offered meditations on the form of the gallery talk or played with liveness and presence through Skype conversations.

Shah’s PowerPoint will function as a point of departure for this conversation between Seher Shah and architect and curator Kanu Agarwal. Shah's slideshow takes the presentation format as an opportunity to test the productive frictions produced by splicing together recent photographic works from Hinterland Structures (2011) and Mammoth: Aerial landscape proposals (2012). The conversation will focus on autonomous objects in the landscape, as well as the role of drawing within architectural proposals in negotiating scale and erasure.